A new poll from Nanos gives more statistical weight to the "co-operation" crowd amongst the opposition parties.  Particularly striking, the results in vote rich Ontario, which show divided opposition to Harper translating into potential electoral barrier.

It's important to not get hung up on every mid term mandate poll- somewhat meaningless with a distracted public- but not entirely without merit.  What we can gleam from almost all the polls, the NDP bloom has waned, and a Trudeau led Liberal Party puts them back in the mix, only denial doesn't compute hard superficial political realities.  This assertion doesn't assume the Liberals can win back power, only a scenario wherein one opposition party fades into complete oblivion- allowing the other to maximize voter discontent with the current regime- likely doesn't transpire.   In fact, polls such as the latest Nanos suggest another Harper mandate is quite possible, a rock solid base that can be quite efficient, more so given the mutual destruction society mentality that inhibits tribal war rooms.

Those who oppose any co-operation are mostly left to "anything can happen" and "you can't simply add up the opposition numbers", which increasingly appears detached from this corner.  From the NDP perspective, I see a better chance of Trudeau led Liberals assuming power than Mulcair, at worst a "blocking" component that will thwart ultimate dreams after the last election breakthrough.  As solace though, the harsh reality has already abandoned traditional NDP ground, the game is really to not only replace the Liberals but become in, rank and file pats on the head aside.  If one questions that landscape, a quite review of every single provincial NDP government the past decade shows a decided centrist leaning, if not outright disdain for anything resembling "socialism".  In other words, practical application demands that for a party to assume power they must appeal to the middle, so call it Liberal, call it NDP, I call it philosophically akin when the dust settles.  This fact makes all the consternation all the more curious.  Liberals can have a former NDP Premier as interim and we support, Dippers can have a former Liberal and they support, but god forbid formal recognition of overlap.

If one wants to put the current spectral contradictions in clear focus, this image sums it up nicely: 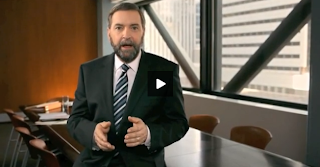 There he is, true progressive and leftie Tom Mulcair in his first NDP ad.  Note what looks like a Toronto Bay Street backdrop, as well as the boardroom feel accompanied by the crisp suit.   A new NDP, the imagery is clear and also telling, because it demonstrates that NDP strategists understand clearly that to widen appeal, they don't have to kill the Liberals, they have to BECOME them!  Some day the veneers will wane and partisans will have the epiphany.  Unfortunately, it might take another Harper mandate to truly wake us from our tribal slumber.

Ask yourself one question: if you are a Conservative, does today's poll make you happy or sad?  Exactly.

I agree that the Liberals and the NDP have to cooperate. Running against each other definitely hasn't worked, so all the analysts who say that Lib voters won't automatically gravitate to the NDP or vice-versa can't argue that the status-quo is the safest bet.

But I think you're missing the fact that support for the Liberals evaporated all on its own, because what passes for "centrism" these days is right-wing drivel.

That being the case, the NDP's move to occupy the so-called "centre" is self-defeating. I think the population has grown sick of neo-liberalism and was willing to give social democracy a try.

In this present debased political culture, the Liberals* are at least nominally committed to the principles of parliamentary democracy, and since I live in Don Valley West, my vote and perhaps even my support, are going to go to the Liberal candidate in the next election.

*Federal Liberals. The Ontario Liberals are guilty of harper-level anti-democratic sleaze and should be turfed toot-sweet.