There are some healthy "renewal" proposals to vote on at the Liberal Convention. And, there is one change in particular that is so watered down that it amounts to institutionalizing the leaders power, not curbing it as advertised: 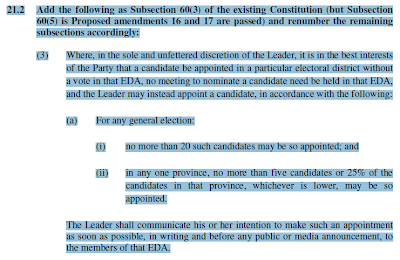 This proposal doesn't sit well, this leader appointment "quota" is supposed to be some improvement, advancement? I don't have the exact numbers for past elections, but allowing our leader to select a full 20 candidates doesn't equate to democratizing the party from this quarter.

In a true democratic party, NO individual should be ordained from the top, they should have to demonstrate their CHOPS, compete for member votes, provide a presence in the riding they want to represent, participate and engage with the grassroots. This proposal is actually insulting on many levels, because it provides two tiers of standard bearers, those selected by riding members and those IMPOSED on riding members with a "father knows best" flavour. If someone is truly a "star" candidate, surely the leader can visit the riding, make the case for she/he, work to get their choice nominated, let that person demonstrate to the great unwashed that they are a person of merit, a real coup to even have in the party.

This amendment looks like some sort of bastardized compromise, in formally "curbing" the leader's ultimate power to appoint, we've come up with a quota that enshrines the practice. Our leader can only appoint 25% of candidates in a particular province, posited as though this is progressive. Taken further, history tells us the leader generally appoints in FAVOURABLE ridings, so 20 KEY people that have a decent shot at becoming an MP are given a free pass, shoved right passed the membership. People put before the wider electorate without much advance knowledge of their positions, there ability to work a room, interact and engage. Having no personal relationship with ridings we are supposedly "empowering", said appointment may or may not jive with the locals, we really have no idea how that relationship will work, very much a forced marriage of sorts.

This amendment reeks of more elitism, it contradicts all the proposals which look to give local members more say in the process. One is hard pressed to find a more grassroots democratic expression than a local riding nomination, it is a core undercurrent that maintains a healthy debate. Giving our leader this almost obscene power to dictate isn't representative of a "modern" political party, of the type Liberals want to project. Instead, this particular amendment fleshes out top down hierarchy, it is regressive, paternalistic and anti-democratic, no matter how you cut it. I'd rather have NO proposal, status quo, open ended appointment power, then this ruse presented as some sort of reform.

I disagree with the total ban of appointments by the leader. I keep on repeating myself, and I apologize for doing so, but people like Marcel Massé, who spent a lifetime maintaining political neutrality as a civil servant, including as clerk of the privy council at the time of the Clark government, would never have been able to spend the time necessary to develop the network of allies needed to win a nomination in a riding. His profession would have forbidden him from doing so.

If the party is going to decide on a total ban, fine, but let's not pretend that this would be 'more democratic'. This is a Harper trap of false pretense. Reminds me of the trick he used in 2006 platform concerning a free vote on gay marriage motion. Of course, had it gone through and the government had tabled a new legislation to redefine marriage, there could not have been a free vote on a government-sponsored legislation. Responsible government doesn't allow this.

Democracy is practised by the electorate. Whether or not a leader imposes a candidate in a riding, in the end the democratic exercise is the business of the voters.

1) So let's propose a lower number

And I think this is still a reform. We're kicking open the door to institutionalizing it, which means it could be further reduced in the future.

Calling this a reform is an insult to reform. So, if you can get 100 people, you get the prize, no contest?

The future is now.

"If the party is going to decide on a total ban, fine, but let's not pretend that this would be 'more democratic'."

I really don't understand "pretend", it simply is more democratic, no question about it, at the core this is irrefutable imho.

As for your example, let the riding decide then if some of the calibre you suggest is worthy of an uncontested nomination. I'd also add if a leader went to a riding association and strongly argued for a certain person, that would carry considerable weight.


To my mind, having one reform which curbs the Leader's veto power over policy, then formalizing his ability to dictate to ridings is a confusing, contradictory presentation.

This isn't really enshrining anything; right now the leader has the constitutional power to appoint all the candidates they want. This seeks to cap it.

I was worried when I first read this proposal that it would encourage more appointments, as I don't recall there being 20 in past elections. Then I remembered that protecting incumbents is essentially an appointment, so we've had way more than to appointments in past elections. So this proposal would be a definite curbing of the power, and this is the proposal that essentially ends the ability to protect incumbents (well, no more than 20 could be protected, in theory.)

I too would prefer a total ban on appointments, with all nominations open and contested. And I'll continue to lobby for that. But in the interim, this proposal is moving in the right direction and offers some improvement over the status quo, so I'm leaning toward supporting it.

Are we sure protecting nominations counts?

Yes, I'd like clarification on that point, because that isn't how I read it, nor was that how I read your post yesterday Jeff?

If this means only 20 overall, including MP's, then I suppose that is an improvement, but still elitist. I actually think no power to appoint is more important than sitting MP's having to re-present themselves.

This amendment was drafted out of Ontario, and some Ontario peps told me the 20 figure is overall, inclusive of any incumbents the leader wishes to protect. I don't believe there is a specific provision anywhere in the constitution that says the leader can protect incumbents; the leader has used their unfettered power of appointment to accomplish that. So by limiting their appointments to 20, I believe that cap would include all appointments, including any incumbents they wish to appoint/protect.

One, no offence to who crafted this amendment, but if you need a tutorial to ascertain just who, what this applies to, it is VERY poorly worded.

Two, this will create favourites for the leader. Not a problem with our low ranks now, but you will have a situation where the leader arbitrarily decides which MP's to protect, which must fight a nomination, that is just pure BS from my standpoint?? So MP's will be inclined to never challenge their leader, lest they be left out of his holy list? I see this as entirely problematic, not progress at all.

I realize the leader has no "quota" at the moment, but this advance or reform looks totally flawed if it applies to everyone. Doesn't look thought out at all, I think you either say no appointments or leave the status quo, this just has the potential to make MP's more subservient to the leader imho.

Steve V: It's like being pregnant: there is no more or less. The selection of candidates by party members is not a democratic exercise. It is the choice of a select few. The election of a candidate by all voters who all have an equal right to vote is the democratic exercise. This is the core of democracy: all citizens have an equal right to vote, and as we are not going to allow all citizens, including political opponents, to choose our candidates, our candidates will be chosen by a select few.

I am a lot more concerned about what a leader can do once in power. Michael Fortier provides a recent example of what a political leader should not be able to do: appoint to cabinet persons who have been defeated by the electorate and leave them in charge for years of important portfolios, like Public Works or International Trade without the assent of the electorate.

As I said, I am fine with a total ban; I do agree that a leader should be able to convince the riding association of the value of a candidate, but I don’t think this is a democratic improvement. It’s fluff compared to the democratic improvements that could be achieved by an amendment to the constitution of Canada regarding the power of the prime minister to appoint.

The LPC should not fluff around the pot.

"The selection of candidates by party members is not a democratic exercise. It is the choice of a select few"

I strongly disagree, it is the expression within a particular party, by it's grassroots members. The wider electorate no, but that's not the point.

Let's not get carried away; this is party politics afterall. While the idea of appointing candidates and leader-appointed nominees may appear anti-democratic, there definitely needs to be some form of quality control on who can run under a Liberal banner (and I understand that this is not quite the same nature). To eliminate a leader - who has essentially faced (or should have) the whole membership through a vote - from having some form of say of who will be running with him, is to open up possibilities that are potentially worse. Ridings with small membership #s could easily fall victim to takeovers by just as antidemocratic (and I know a neighbouring riding where the executive is essentially a family fiefdom, where involvement is accepted only if they accept that fact) factions, or it could select someone who is complete unpalatable under the current-day Liberal platform (the anti-abortionists who carried their banner for us, for eg.)... I agree that there needs to be some restrictions to the leader's powers in this topic, and in Steve's version where a nominee candidate could receive an endorsement of the leader -- but what does that spin into when that candidate loses, and the new candidate becomes the news story?