One of my favourite places on the face of this earth is "Jumbo Pass" in southeastern British Columbia. When I lived in a little town called Windermere British Columbia, my future wife and I would regularly drive up past the Panorama Resort, down an ever narrowing and bumpy gravel road up into the most pristine wilderness one could imagine. Soaring glacial peaks, wildlife everywhere, peaceful, spectacular, accessible but yet remote, I can honestly say the place is magical. When I moved back to Ontario, I would return to Jumbo Pass, I've been back six times in the last decade. I've brought friends there specifically to share the place and they've come away thoroughly impressed. I've made an emotional journey with my dying mother, who was simply awestruck and thanked me for dragging her up there, despite her trepidation at being so far removed from anything. It was a memory my mom recalled on her death bed, it made that much of an impact on her, as it does to everyone who has the opportunity to see it. 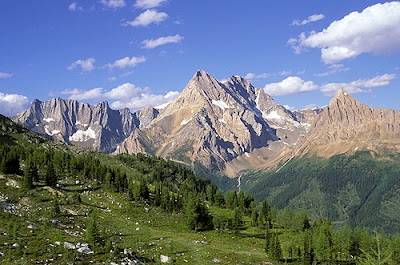 This approval has been a twenty year battle. You can get lost in the back and forth arguments, as with every project, differing points of view. What strikes me is the fact nothing is sacred anymore, there is no "enough is enough" with human beings. The Invermere valley below is BOOMING, every time I return that much more development, another golf course, more oil money pouring in from Alberta, the area is rocking by any economic definition. Frankly, the place is losing its charm, but that's what happens to attractive vacation spots. My point being, this isn't a town in dire need of employment, all the benefits argued only mean more people, not a required need for the already resident population. To think of 700000 visitors going up and down Toby Creek to some manufactured "village", hard for me to see the appeal. As well, on your way to this new resort, you'll pass the ever growing Panorama Resort, which begs the questions again, when is enough enough?

Why do we "have" to develop Jumbo Pass? Why does the government of British Columbia not see merit in preservation? Why must every developer win in the end, going through "hoops" fine, but can't we just say NO every once and a while, particularly for an area increasingly rare and unique? I feel quite confident in saying this particularly area doesn't "need" another resort, another golf course, another fine dining experience, another gluttonous excess at the expense of rarity. Leave it alone, leave the goddam grizzlies alone, even if you can't be there, you know it exists and that's enough. One day, they'll look back in wonder at our short sighted stupidity, and our perverse sense of "progress". A Jumbo fail, and I'm ready to join the fight....

Merde! I was there once when I moved to Calgary in 1979. Amazing to think we need to pave every inch of the world. The BC authorities should take a trip to Aspen. Don't get me wrong, I love the Roaring Fork Valley, but what was once trippy cool Aspen in now where the Billionaires are chasing away the Millionaires.

You should see the development up at Panorama, but of course that isn't enough...

Shame on them, all of them.

They paved paradise and put up a parkin' lot
With a pink hotel, a boutique, and a swingin' hot spot

They took all the trees, and put em in a tree museum
And they charged the people a dollar and a half to see them

Gangster capitalism merged with global corporatist and took over the world from Wall Street: the Whore of Babylon is getting her due, and the worshippers of Mammon are lying up at their newest boutique gravy train. Follow the monied, that's by whom the crimes against nature and humanity are being committed.

Ex BC Premier Gordon Campbell, thieved and sold our BC rivers. If you can imagine??? Fools put hydro dams in those rivers. This has destroyed important Salmon runs. The dams leave thousands of fish stranded, out of the water. There are fish carcasses all over the place around those rivers.

And of course, there is the battle over the Enbridge pipeline and the dirty tar tanker, coming into BC. Over 80% of BC citizens, are supporting the F.N. to stop these atrocities, from destroying their food sources. We need to protect, our beautiful Orca Whales, their numbers have just started to pick up. There are also the Humpback Whales and thousands of marine species in the sea...right where the dirty oil tankers from China have to travel, to pick up the dirty tar oil.

This will be a fight, right to the last ditch.