EKOS is out with a poll today, which Mr. Graves describes as a "good" one for the government. Relatively speaking, it is a positive result for the Conservatives, they now enjoy a 7 point lead, compared to 5.5 in the last EKOS offering:

Of note, another pollster that shows a dead heat in Ontario, Fantino mania not yet congealing into "storming" consistency. Graves repeats my line, that Ontario is fully "in play" come the next election- a point which can't be stated enough, when one considers why some might not fear as they supposedly should. I predict a wild ride come the election in Ontario.

Here's a graph that deserves attention: 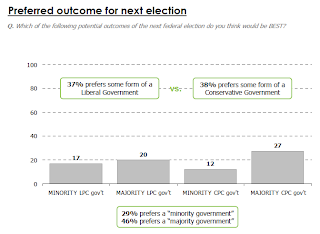 The type of result that supports the Liberal strategy of trying to narrow the question down to an either/or. Even with a "good" poll, when voters are asked which government they would like to see, the Conservatives have no advantage, complete saw off. The more us vs them the Liberals can make, the more opportunity exists. On the other hand, this poll shows how the "coalition" angle, a muddied picture can still work, marginally, for the Conservatives. The Liberals will try to make it a clear choice, the Conservatives will try to make it them or some nebulous and scary unknown alternative. The above graph is a key consideration, one that could dominate the final days of the any campaign.

It is worth noting, and this explains a great deal about preference, that a "good" poll for the government is now below their 2006, 2008 results. Yesterday we had the Angus Reid poll, which also showed a meagre 34% support for the government (a pollster which tends to shower higher support for Cons, relative to others btw), reinforcing this notion that the government has little upside potential by calling an election. Reading the government posture the last few weeks, I'd bet their internal polling shows the same stagnant support. I honestly can't remember the last poll that put this government beyond majority support, so from their what's to gain from an election? The odds suggest more of a chance for seat erosion, rather than pickups.

Technically, if Harper is defeated on the budget,The PM goes to the GG, the GG, a constitutional export can argue Canadians don't want to pay for an election, and so propose that Mr. Ignatieff attempt to create a unity cabinet, based on proportional representation of the last vote, in which neither Mr. Harper nor Mr. Flaherty can appear because of the lost confidence motion, but which cabinet will otherwise be so formed as to keep the confidence of the House until the four year term ends and the scheduled election occurs, much like a municipal council that loses a mayor et al and fills its term anayway.

There's nothing to gain for Harper with a 34% poll number, and they know it. That's why he's pulled out the Party Subsidy thing out from his hat again. He's hoping for the coalition to come out and boost his numbers.

Easy solution, the Libs this time should signal they are open to ideas on this; and let the NDP, Bloc & Greens cry blue murder for a while.