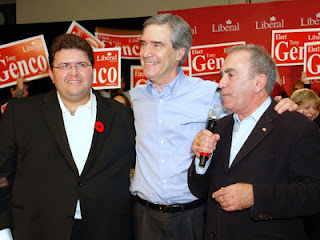 I remember the first time I heard of Tony Genco, when his name was floated to take on Julian Fantino in Vaughan. I immediately did some research, wasn't particularly impressed at all and I made that view known on twitter. Genco screamed lightweight, looked nothing more than a convenient hack, but after initial questioning, I tried to look at the bigger picture and shut my yap. I mention this now, so nowhere accuses me of convenient criticism, now that Genco is the standard bearer for these anything but "Progressive" Conservatives in Ontario.

Oh, we had such fun when Genco first endorsed Fantino in the last election. Personally, I retweeted many of his comical attacks on Fantino, which served to expose the duplicity of a man who really stands for JACK SHIT, his words hollow, simply bitter because Liberals came to their senses and realized he was a second rate, perennial loser candidate. The lesson of Tony Genco is one Liberals need to heed in the future, we need people of character and conviction, not second rate mercenaries that lack integrity.

That Genco is now running under Hudak's banner, against his former "mentor", cements his BUFFOON status, almost unrivaled in recent memory. Honestly, how can someone pivot so profoundly? No one can claim that the looming Ontario election lacks distinctions, clear philosphical departures, between the two main parties. Genco has moved to a hard right expression, which again highlights a man who really stands for nothing, apart from political convenience. I remain confident that the people of Vaughan won't reward such duplicity and lack of principled candidacy. Who is the real Tony Genco, nobody can be sure?

A lesson for Liberals moving forward, like any "team" character and integrity our chief want. On the plus side, Tony Genco now runs for the Progressive Conservatives, what a COUP for Tim Hudak, having the biggest buffoon in Canadian politics by your side, symbolizing all that is wrong with the modern, disingenious politican. He's all yours guys, and I suspect his perfect record remains in tact!

A buffoon? Sounds like somebody who polishes cars. I wouldn't let him polish mine.

First Rocco Rossi, now Tony Genco...and then we have all these people who promote themselves as big "L" Liberals at election time in Toronto like and then they vote with Rob Ford 100% of the time 9are you listening Cesar Palacio, Michelle Berardinetti, Peter Milczyn, Norm Kelly etc...). What are we to make of this.

At least there are still a very small number of progressive Liberals left in Toronto like Shelley Carroll - who was willing to stand up and denounce people from her own party who are Ford enablers.