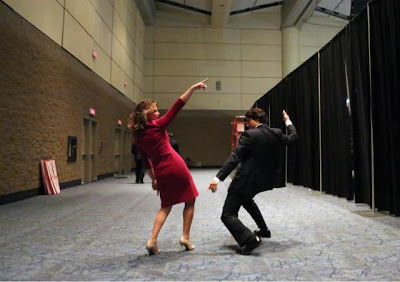 Despite there being a national media obsession with everything Trudeau, there still seems a disconnect on the comprehension side.  People continually attaching their own cobbled benchmarks to a landscape that bears no relationship to those unilateral desires.  This past weekend some evolution, confronted with certain realities that challenge the punditry view of the world, nothing particularly surprising for those of us that take it like it is, rather than how it should be.

If there is one more overused word as it relates to Trudeau it's "substance".  It's as though people forget our current Prime Minister wasn't elected on FIVE THIN policy positions, mostly made up of gimmicky manipulations to curry favour.   It's as though we believe people in Quebec moved to Layton because of some deep philosophical epiphany, rather than being the only "fresh" option presented to a tired and cynical electorate.  It's as though we don't understand that individuals have talented teams behind them, capable of policy development, demographic appeals and organizational aptitude.

The other parties should be rightly afraid, and I don't believe I feel this way simply as an extension of mindless partisan want.   Trudeau has a unique potential demographic appeal, one that basically assures Mulcair never becomes Prime Minister, at the very least Trudeau is a spoiler, at the best Prime Minister himself.  Polls are encouraging, particularly with older demographics, people who vote consistently.  As well, there is no disputing Trudeau has potential appeal amongst the disengaged "younger" voter, which could provide the double whammy of inspired volunteers, as well as sleeper voting demographic.

Trudeau is cool, hip, energetic, the above picture an absolutely perfect snapshot in some many ways.  While the armchair types criticized this leadership process, they forget a certain practical truth: Trudeau packs them in.  Where ever Justin travels, he brings a "rock star" vibe, nobody disputes it, it will not wane in the short term, it will provide a powerful momentum boost during a campaign.

Liberals have been burned bad prior, believing policy wonks can translate, resonate, reverberate, inspire and motivate.  Liberals have already played the movie the pundits now crave, which comes with a certain irony given the past criticisms when provided with their apparent desire.  Here's the rub, the media DOESN'T want substance, they want a story, they want intrigue, they want to be where "it's at", we needn't over analyze simplistic nature, despite protestations to the contrary.  Trudeau sells, Trudeau appeals, Trudeau provides a tension, the fascination will not end.  Add on a growing recognition that Trudeau actually does possess some chops, Liberals can certainly be optimistic about the future.

If these views sound presumptuous, then certainly the caveat that things change on a dime in politics, it's all probability rather than assured.  That said, it is true we are dealing with a certain phenomenon here that shakes up the political metrics, obliterates recent assumptions and provides great possibilities moving forward.  Liberals need to manage expectations, although I suspect the obsessive attention continues, so perhaps better to embrace and direct, rather than balk.

Despite all the cynicism in this world, people still crave positivity, we still want to believe in something.  A person that can actually tap into this latent desire, pierce the dismissive posture, is a force to be reckoned with, make no mistake about it...

The media is not the least bit interested in policy, they spent the entire Dion election complaining that he never explained the carbon tax, and despite the fact that 140 of the country's top economists thought it was the best option to deal with climate change, they never responded to that either.
In 1970 Keith Davies warned about what would happen to Canadian media if concentration of ownership trends were allowed to continue.
You can barely get a handful of Liberals let alone media types to face up to the reality of three corporations running most of the news.
What the media thinks about anything, while still carrying weight with people who ingest TV like junk food, means nothing to anyone who thinks for themselves.
I don't like Trudeau because he's a neo-liberal, but I have never made the mistake of thinking him a lightweight, even I put him second on my ballot, if only because I can't think of anyone I would rather see Harper or his cons wake up to as Canadian PM the day after an election.

Good post, Steve. Hope all is well with you.

Your friend down south (formerly Vancouver ;).

Good post Steve. I totally agree with you Jerry.The media is the private support campaign group for the lying Reformatories. Of that I never had any doubt. Ever notice how Harper has paid off his senators, Wallins FLabby Duffy, Both newspaper people

I am amazed of the continual refrain from left and right that Trudau is a "lightweight." He has continually come out on top as his detractors laughed and poked fun.

In reality, Trudeau is, as your commentator pointed out, a neo-liberal in the tradition of Paul Martin. But as a politician he has that quality which the most successful politicians have - he can be all things to all people.

Lightweight? I think not. In fact he carries the heaviest weight of all - maluability in the eyes of the electorate.