My daughter reacts to news from Santa that she will be receiving the 2008 Harper calendar for Christmas: 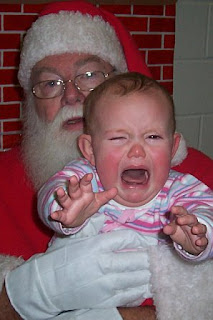 Nice picture.... But I must admit, I just had the same look thrown onto my face by a commercial that I just saw on TSN.... Stephen Harper hocking the World Junior Hockey Championships.... yeah, what won't this man do to try to get on TV.

Ia that really your daughter?

Harper is a media HO HO HO and a Merry Christmas to all.

Sassy.... oh, I know Harper is a media whore, but hocking Junior Hockey on TSN??? Isn't that just a tad bit over the top???

NL, over the top for a statesman while still in office - yes of course, but from what we have know of PMSH - not really. :(

Great pic. Somewhere in the far distant future, your daughter may have a few choice words for you having posted her first Santa moment on the great wild internet.
Hopefully next year Harper may be auditioning for a mall Santa job somewhere...

Did Stephen Harper really just say in his interview with Peter Mansbridge that his government was going to implement climate change policies so draconian that people were going to complain he went too far??

Not only is your daughter a cutie - she has good instincts.

From the mouths of babes....

No. He said that Canadian's "think" they want action, but the reason the Liberal's didn't actually "act" is because the political price to be paid from doing anything, because of its effects on the economy and people.

He also said, that its coming and your not going to like it (Buckley's?)

"He also said, that its coming and your not going to like it."

No tomm - WE will like it. His supporters will not.

And that is fine with me.

That's my girl, who is actually happy most of the time ;)

"his government was going to implement climate change policies so draconian that people were going to complain he went too far??"

I saw that too. Harper is trying to convince us all that he is serious, but the funny part, he criticizes others for "ruining the economy", then goes out of his way to say his measures will hurt.

steve v., you are without shame! Using your own daughter for your leftist partisan posts! That surely is a form of child abuse.

Cute gal! Makes for a nicer Christmas, having little ones around, doesn't it?

"Makes for a nicer Christmas, having little ones around, doesn't it?"

I have a four-year old boy too, who is quite psyched this year. Lots of fun :)