A fascinating EKOS poll this week, primarily because while the national numbers remain stagnant, the underlying trends deliver some potentially serious storm clouds brewing for the government. The two week poll shows a narrow 3% lead in the first week, which rose slightly, back to the 6% we saw for the last EKOS release. It's the same old story, blah, blah, blah.

BUT, an entirely striking result is found on the direction of country, direct of government front: 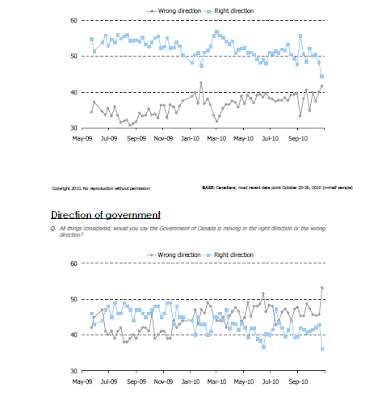 Dramatic shifts on both graphs. What is particularly noteworthy, the LOWEST tallies on direction of country and direction of government, dating back to the height of the recession. This latest finding is a clear departure from the past meandering trend.

Why, what caused such a big shift? If you put aside the "one off" consideration, interesting that Graves also asks questions relating to our foreign policy. These abysmal numbers for the Conservatives tend to support the weakening confidence in the direction of the country and this government's ability to lead it. A lowly 22% of Canadians believe the Conservatives have helped Canada's international reputation, while 45% believe their policies have hurt. When voters are asked if the app/dis of the government's foreign policy, again only 21% approve, while 37% disapprove. Breaking down the regionals, the numbers are even more concerning for the Conservatives electorally. The Conservatives can't even generate base level support on these questions, a very concerning dynamic.

Last week I argued that a new front has been opened, foreign policy now on the table, due to the recent embarrassing events. This poll demonstrates an achilles heel, the only question will foreign policy be important enough to move votes in an election. I would suggest foreign policy will not dominate, but it will be a point of distinction, an irritant that potentially could hurt re-election chances. In addition, it is plausible to see the sharp decline on the direction front as partially attributable to recent foreign policy news.

The numbers haven't moved yet, but we see new underlying weakness, historical lows on broad markers. If I'm the government, this result makes me uneasy, to say the least.

Foreign policy never moves very many votes. So Iggy's job will be to connect it to other issues and trends and narratives that do move votes.

Allow me to suggest a few:

Harper's international "diplomacy" is alienating Canada, from its closest allies like the US to markets we desperately need to expand in like India and Europe. This has an adverse effect on Canadian businesses, particularly in multicultural communities.

By being such a bull in the china shop, Harper has lost power and leverage in negotiating trade deals and treaties and resolving differences. This hits Canadian businesses, especially smaller businesses who need our government to stand up for them to break down barriers set up by foreign governments and monopolies.

For no reason, Harper goes out of his way to piss off neutrals. Look at his Arctic Council approach, deliberately excluding and insulting some players. The more isolated we are, the less likely we can turn to them for any kind of support in preserving our northern passage and sovereignty, especially when the US and Russia already exert so much influence over them.

By putting ideology ahead of Canada's interests, we only hurt and isolate Canada while doing nothing for the foreign citizens. This Ukraine slap in the face is a good example: how idiotic is it to slap the government in the face with one hand while trying to shake their hand on a trade deal with the other?

Isolation in the world, ideology over Canada's interests, competency. None of that is good for Canada and all of that parallels with Harper's approach to domestic policy.

Agreed. You won't move votes alone, and maybe this poll proves that, but it can be another powerful front to undermine overall confidence in the government.

These are very striking results (not mentioned in the CBC.ca story on this poll but that's another discussion).

I do wonder if the Liberals should have been capitalizing on this last week and the boat has already sailed.

Canadians care about our standing in the world and that, along with the economic factors that Ted Betts lists, can be used against the Conservatives. Harper is making Canadians look bad and we take pride in our international standing. Canada, under Harper, is no longer punching above it's weight class.

This may not be an election issue but since we're not currently in an election a reasoned and less frenetic (if such a thing is possible in today's news world) discussion could be used by the Liberals and especially Ignatieff to boost their image.

This is an area that the Liberals are prepared for both because their foreign policy paper was released months ago and because of Ignatieff's background/experience.

But how would you get anyone to hear what the Liberals say on this now? Unless it's a bad news story the media barely covers the Liberals. Pity the Conservatives were too smart to actually run those ads about Ignatieff and the UN as that would have keep this in the spotlight.

Pity the Conservatives were too smart to actually run those ads about Ignatieff and the UN as that would have keep this in the spotlight.

Indeed, now everyone understands why I wished the Harpernauts would've run those ads.

Regardless of the polls being somewhat stagnant and preserving a 3-6% CPC lead, all this bad news lately for Harper (F-35 contract, Hill Renovations Gone Wild, UAE airline/base blunder, loss of the UNSC vote) is taking a toll. If an election were to happen anytime soon, that massive undecided number is being fed very negative stories about the sitting government. It is negating the few things they've done right (EAP spending oversight) and drowning out their stupid 'coalition' scare. In short they have no traction to help improve their poll numbers anymore. Pianoman is dead.

EKOS Graves on CBC just said these "direction of country, direction of gov't numbers are lowest in a DECADE". Wow.

Interesting to see what happens now - the Harper government expenditures are out now and it's unbelievable.

I remember watching Al Sharpton on a debate panel during the election (Bush's second term) saying "they want you to tighten your belts when they've left you standing in your underwear". That statement sure fits the situation right now in Canada.

The government is weak but for all his openness Iggy is not perceived as strong, his underlying problem is that of liberalism itself, sheep or goats time. Corporatism is anti-Liberal democracy, and so he's left with is a childhood dream of becoming PM. Liberals are trapped in conservative defined neo-liberalism, and have abandoned hope of reaching philosophical liberalism: the pursuit of greatest equal liberty. The Liberal right wing is killing liberal democracy in favour of conservative corporatism. It's now or never time, and I'm not sure Iggy is a now or never kind of guy.

Well, Ignatieff has fired a shot in this battle reported at: http://www.cbc.ca/politics/story/2010/11/02/ignatieff-speech-foreign-relations.html

The Conservative partisan went ape-&#$% crazy about it too.

Kirk said...
"Well, Ignatieff has fired a shot in this battle..."

He needs to keep it up. Harper embarrassing us on the world stage and his foreign policy blunders need to be underlined. The partisan Reformatory ape-&#$% crazy response shows how badly vulnerable he is there; they know Canadians care about how the world views us. Love how their responses somehow involve accusing the UN of being anti-Semitic, though they don't come right out and say that - it gets close.