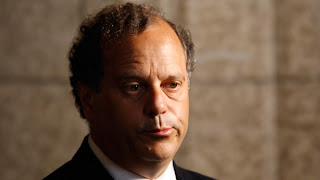 With the endorsement of Ed Broadbent- and all the structural weight that carries- the prospects of Brian Topp actually winning the NDP leadership just became more probable, he may even be the front runner. A lot will depend on the campaign, but now Topp is firmly positioned at the center of the debate. I admit, I'm a bit flabbergasted that Topp is a serious contender, even moreso that Broadbent has come out so early and enthusiastically backed his candidacy.

I've seen quite a bit of Topp, as well as read some of contributions. Smart, strategic, sauvy, Topp is clearly someone that deserves serious attention. However, the guy has never struck me as a politician, in the sense of having any gravitas necessary to resonate. In fact, Topp's dour disposition- an almost deadpan delivery- has always struck me as the prototypical backroom operative, long on political acumen, short on the overt common touch. It looks like it hurts for Topp to smile to be honest, and my instinctual reaction is that he has potential flop written all over him. Perhaps I'm missing something, but there seems nothing overtly compelling in terms of style, disposition or delivery, at least in the sense of instant frontrunner.

Is there more to this story than meets the eye? I'm not one for conspiracy theories, but the quick floating of Topp after Layton's death, the close ties to his inner circle, is he a concoction borne of a "stop Mulcair" sentiment? Seriously, when you think of successors- particularly now with Quebec's emergence- Mulcair is the first name that comes to mind, and it has been for sometime. Instead, we see a quick strike to put Topp's name into the mix, and now Broadbent comes out straight off with a gushing endorsement. Plenty of niceities directed toward Mulcair, but is Topp the bilingual counter from those who are weary of Mulcair's potential leadership? I'm inclined to think Topp has a anti-Mulcair genesis if only because he is such an AWKWARD consideration to begin with. However, when you start to wonder who could challenge Mulcair in Quebec, who has the creds that could counter his assets, then Topp starts to look plausible.

Topp running is a perplexing development in one sense, within the lens of Mulcair however, a more logical sequence begins. I'll keep an open mind moving forward to see if Topp does have the chops to be Leader of the Official Opposition, but right now I'm not feeling him at all. This candidacy looks forced and somewhat unnatural from here...

Would Topp be the candidate most likely to engage in discussions about some form of electoral cooperation with the Liberal party?

I think so, and that may be why Broadbent is endorsing him. If this were strictly about getting the most seats for the NDP, then Mulcair is the man. If it is about a chance of getting any NDP policy enacted by a government, then Topp is your man.

I don't know much about Topp, but in general I find the transition from backroom to political leader doesn't work that well. They have the savvy, but they don't have the personal appeal or the feeling (whether real or bogus) of someone with vision rather than someone with tactics.

crf, I wonder about whether Mulcair is the one who could get the most seats for the NDP. In Quebec, sure--but the NDP already has about as many seats in Quebec as it's gonna get. Not losing them again is important, but taking it to the next level mainly requires further growth outside of Quebec. Mulcair is energetic and forceful, but is he the guy who can make Canadians want to vote NDP? Can he keep his cool, avoid gaffes, and communicate a positive vision?

I don't find either of them that compelling.

Yes, he lacks any degree of chrisma whatsoever which, common sense would suggest, should exclude him from ever winning an election. The problem is that the only present leader I can think of with as little charisma has Topp is . . . . yes, the Prime Minister.

I'm thinking we're witnessing the beginnings of an "Anyone But Thomas Mulcair" movement. I'd like to see Topp win just to see what Mulcair might do.

"Would Topp be the candidate most likely to engage in discussions about some form of electoral cooperation with the Liberal party?"

NO. The NDP has no interest in electoral deals with the Liberals (and I suspect the feeling is mutual). Post election coalitions or accords or cooperation are more than welcome.

Maybe they like the possible slogans you could generate with his name -- "Reach for the Topp," "The Topp of his Game." ;)

(Sorry, just came up with these.)

DL said... "NO. The NDP has no interest in electoral deals with the Liberals"

I think Pat Martin would beg to differ.

Incidentally DL, I understand your opposition to any electoral deals between your party and the Grits if they're leading to merger talks. I am without a political home due to a previous merger, so I think I can relate.

However there is at least one other person out there who is even more interested in keeping the NDP and Libs from forming any political union, and that would be Stephen Harper.

DL, I know you'll strongly disagree with me on this, but so long as opposition is divided, he and his successors in the CPC will rule for many years to come. I'm not sure people fully realize all the mechanisms now in place that are cementing the CPC in it's position of power. There are many more than the Libs enjoyed under Chretien.

Waiting for scandals and the public unpopularity of Harper to take their toll will not just instantly propel the NDP to government. Remember the Libs thought that way too.

I don't wish to see a merger either. I enjoy more political choices, not less. But the two parties need to put aside the years of partisan animosity and start working together. If not you'll both be in for a surprise in 2015, and not a good one.

Well, Pat Martin can advance that idea all he wants, and I'm perfectly fine with him doing so. Air all the positions, have people run who speak for different points of view, that's the kind of thing ya wanna see in a democracy.
But I both hope and believe he and the pro-merger position will get trounced. I really don't think there's much support for it.

Agree completely KW, and the more sudden cockiness I hear, the more I'm convinced dippers need a cold shower in 2015 to get it. Sad, but true, and there is no convincing otherwise at the moment. Harper sleeps VERY well.

Really Steve? Cockiness?? For a party that came from a one that most Liberals dismissed as little more that a "bothersome" impediment to their own governance, I think the NDP is displaying a remarkable degree of humility. This is not to say that the NDP will ride this to government or even to a second term as the official opposition, it may not - particularly if they chose Topp or Mulcair as leader. But I associate with plenty of NDP members and I have seen little sign of the cockiness of which you speak. I think the real issue that people should be wondering about is when will history, which seems to inevitably punish genuine hubris and self absorbed political gamblers, catch up with our present government as it did so stunningly with Nixon, Mulroney, Thatcher and others in recent times? Anyone who relies so heavily on sheer dumb luck to maintain an agenda of covert governance and implicit tyranny seldom ends well in modern Western democracies. I, for one, am simply waiting for the sound of the other shoe to drop and I suspect the sound will be deafening.

Absolutely. Look at all the "libs dead" stuff, even though they got more votes than ndp in 08. It's funny, enjoy the moment, but the HELLO in there paradigm is coming, off that I have little doubt. Time is my friend.

"However there is at least one other person out there who is even more interested in keeping the NDP and Libs from forming any political union, and that would be Stephen Harper."

As we can see in the Ontario election campaign - the way to defeat Tories is by convincing fewer people to vote Conservative - you can easily have a strong Liberal party AND a strong NDP - and still defeat the Conservatives. It worked in Nova Scotia and its working in Ontario.

Actually Harper's worse nightmare is that the Liberals do what they should have done years ago - get a new leader who is a John Manley Bay St. type - become a free-market party that is small "l" liberal on civil liberties and social issues and start cutting into the Conservative vote! The Liberals should become to canada like what the FDP is to Germany - a party for high income professionals.

well I see them coming down from cloud 9 and wish so.... no one can re do the Layton Act of high illusion. /with all respect/ reality sets in .. harper will come to full circle... and after some years we can should be the Top dogs.
mark my words

Since this will be a one-member-one-vote, they're going to need to sign up a lot of people within Quebec and some of the other provinces so that there won't be distortion in the upcoming leadership race. As one article notes, Quebec has 1,695 NDP members. The large number of potential BC votes, might explain Topp trying to appeal to BC NDPers. (BCers make up 1/3 of the potential votes in this campaign.)