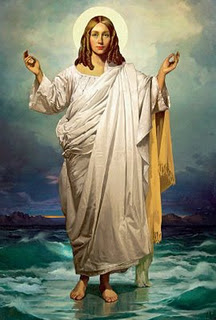 The moment you mention the words "Liberal" and "messiah" together, it seems to generate some heated debate. I'd like to flesh out my assertion that this point in Liberal history necessitates a search for the controversial "messiah", BUT not in isolation OR sole energy exhauster. In other words, yes, we can walk and chew gum at the same time, so articulating a want doesn't preclude other vital reforms or evolutions. My mind doesn't work on one track exclusivities, so there is no choice or preference consideration, just a recognition of a certain required facet.

In the past, Liberals have been guilty of trying to short cut "rebuilding" by finding one glamorous person to take the reins and make all right. Critics are correct to reject this mentality, and past examples offer instructive wisdom on the leadership front. Truth is, you can pick the most compelling figurehead, but if that person doesn't have the potent organizational tools, the stout base, financial wherewithal and rooted ideals, it's a recipe for failure. In many instances, I agree, Liberals waste precious time hunting for the next Trudeau, at the expense of more mundane pursuits.

However, I would argue we Liberals are in a unique circumstance, our perch precarious. It is important that grassroots Liberals rally behind the flag, and in some respects the post-election period has been encouraging. That said, I see no emerging crystallizing force on the horizon, no commonality that can breakout beyond a conversation between fellow Liberals. Given the new Canadian order, past examples really aren't analogous or comforting, the Liberals have never faced a reality as stark as today, that just seems plain fact from this quarter.

The Liberals need a lot of things, and chief among them is an eventual new leader that resonates, armed with an updated articulation of modern liberalism. Liberals need the vehicle to propel our aspirations, and it's simply foolhardy to bristle at messiah talk. Liberals need a game changer, a voice that mixes up a new status quo which marginalizes us all day long.

A leader that symbolized a grassroots western expression built such a formidable base that party took over the old PC party and now sits with a majority. A leader with the common touch and a perceived authenticity turned a nothing party in Quebec into a political powerhouse that propelled him to potential PM in waiting. Leadership matters, leadership matters A LOT, it's vital, particularly when your down, but not quite out.

I joined the Liberals when a certain leadership candidate joined the fray in 2006. This candidate articulated a vision that spoke to me, it was a message I felt like investing in, it allowed me to overcome my resistance to "tribes" and independence, it engaged and inspired me that things could change for the better. Leaders provide direction, focus, passion, motivation. Leaders bring in new people, new ideas, can galvanize reform, can challenge the status quo, can make Canadians take notice and reaccess past assumptions. Yes, the political party must do the heavy lifting, there are NO shortcuts. But, particularly within this sober Liberal reality, our next leadership decision will be the most critical choice we make, of that I have no doubt. Consider me an unabashed messiah seeker. Amen.

Hey, missed you at the Prog blog meet up.

Thanks. Was away on Saturday, would have loved to check out the demonstrations as well.

I don't think Harper was the Conservative messiah - but he was good enough. He was smart and hardworking (as Flanagan's book shows), and stuck around for more than one election before winning a minority and three before winning a majority.

I think we broadly agree but the word "messiah" implies some magical touch that, while it can't hurt, typically isn't actually required. I'm not saying we shouldn't pick one up if it comes along, but I also don't think we should fold up the tent if we don't find one.

Messiahs are too easily crucified. Do the Liberals really want to witness Harper's Legions nail up another one? I sure don't.

Yeah, but they're also suppose to be good at resurrections. ;)

Yeah, Harper wasn't the guy who built Reform. That was Manning, and Manning's old supporters have always groused about how Harper betrayed everything Manning stood for.

As for Layton and Quebec...that wasn't just leadership. That was also planning, patience, wit and a certain level of zealotry towards an ideal. All of those things need to be present in the party as much as in the leader.

The problem with seeking a Messiah is that you're never going to find Him. You're just going to find a person. Like Harper, like McGuinty, like Harris, and like other successful leaders, they're quite possibly going to lose their first election. A good rebuilder might never even be prime minister. That's just how it works, and part of the problem is just how impatient the party has been.

Oh, and considering that the last "Messiah" was Ignatieff, I'd be pretty careful in looking for another one. His "disciples" didn't help much.