I suspect Ottawa will look even more absurd as usual today, as the Conservatives react to the "scathing" Auditor General report on the F-35. I look for the government to embrace the AG report, even THANK him for his good work in the name of the public interest. The Conservatives will pivot, distance themselves from the military and try to paint themselves as pushing for transparency. In reality, nobody should be surprised, truth is many, many people have sounded the alarm on the F-35 for months, years, news ONLY to the willfully ignorant or patently incompetent.

The F-35 will test the instantaneous environment politics now operates in. The Conservatives will be successful in distancing themselves from the F-35 problems, only if one exhibits no long term memory. Let us not forget that the now famous Statement of Operational Requirements was kept from public view, despite other SOR's released for other procurements. The Conservatives could have put this document in the public domain, they didn't and it is simply to convenient to just playing DND for the transgression. Where is the secret letter Harper floated during the election, the one that made us immune for cost overruns? I encourage everyone to review Laurie Hawn appearances on CBC, listen to his arguments in the face of the very accusations that will see the light today? The AG finding fault with the military doesn't absolve stonewalling, and outright deceit, as this government looked to bury a potential election problem and would say whatever they felt appropriate to silence criticism.

The Conservatives have now capped the plane purchase at 9 billion, which objectively means we will never meet the "minimum" number of planes they themselves have argued (see Peter MacKay). The Conservatives cornered themselves with their nonsensical expenditure figure, using TEN YEAR OLD data provided by the VENDOR. Now, in an effort to wiggle off the hook, they cling to the expenditure and in so doing GUT their own arguments about low end requirements. Leave logic at the door, and perhaps you can square the Conservative talking points. 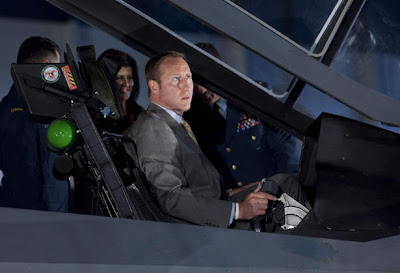 There will be no more leaked reports of Russian jets buzzing Canadian airspace. You won't hear about our aging fleet of CF-18's and their drop dead date, at least not from Conservatives. The days of the "only plane" capable of meeting our needs are over, NO, now we will embrace the shipbuilding procurement model at this late stage and spin it as transparency. The military may have "misled" the Conservatives, but that doesn't distract form the carefully crafted manipulation presented to the Canadian public, "misled" a kind term.

Today will be an exercise in "distancing" oneself. This strategy will be successful, only if one completely rejects the notion of long term memory, only if one confines themselves to today and beyond, because this F-35 story has been a shameful episode in Canadian politics and these Conservatives VERY much played a key role. Canadians were the one's "misled", and don't forget it.

Peter MacKay in that pic is hanging out with a guy in a hoodie, republicans know what that means, a terrorist.

Its a great out for them. Long did they state that it was 'unpatriotic' to debate the F35 program.
This has to be orchestrated, it is simply too easy, especially after the last couple of weeks and the confirmed cost overruns of the program...they needed some scapegoat.
Who will remain unaccountable for this, MacKay...and it defies belief that he can walk away from this after 6yrs of pom-poms to suddenly just shut it down.

All their blustery and condescending statements made to anyone who questioned the F-35 program ought to come in handy for a negative advertisement or two. Come for the accountability, stay for the incompetence! The Harper Clown Show trundles along.

If there is one ad the Libs should run in response to the attack ads, it's a simply review of quotes coming from these sanctimonous charlatans!

"We don't accept the premise of what anyone says but us, we have one principle, and believing only what we want to believe is it: there's nothing to see here, so everyone should just move along, we have a country to govern, and you're wasting our time with realities we don't perceive."