Night Of The Neanderthals 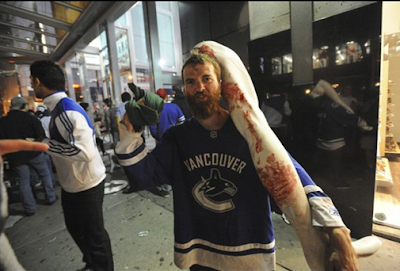 A battered guy on the ground wearing a Bruins jersey. A security guard getting the shit beat out of him, simply trying to stop looters from destroying his store. This colossal asshole above with the bloodied manikin leg, god only knows how it got that way. Looking at the video, the images, it's like some foreign land, but unfortunately it's Vancouver, and all the positive imagery of the last few years evaporated in one painful night.

I lived in Vancouver a long time ago, and I've since returned many times, it's a fantastic, vibrant city. The last time I was in Vancouver, the city was sprucing itself up for the Olympics, full of pride and ready to show off it's splendor to the world. Some called it the greatest Olympics in history, particularly the beautiful expressions, people taking to the streets to celebrate and share. We all know there were other stories of drunkenness and unseemly behaviour, but the overall vibe was simply tremendous and all Canadians felt pride that Vancouver had done such a exceptional job, even more the people that organically made for such spectacular scenes.

I have a confession to make, I don't like the Canucks. Not sure why, maybe it's a Leafs fan thing, but I find it hard to cheer for the team, despite past residence. However, I cheered for the city, because I know the passion and I absolutely LOVED the outdoor gatherings, it reminded me of the Olympics, it was CEMENTING Vancouver as a beautiful community, almost uplifting. One caveat, I've always hoped we could see such expression evolve from more than mere sport, but hey, you take what you can get.

What is particularly sad about last night, it was the very scenes of outdoor glee, massive crowds gathering to unite and share that ultimately turned into the most ugly display imaginable. All that positive energy, all the lead up throughout the playoffs, all the goodwill, absolutely obliterated, replaced by blood and fire, apocalyptic scenes and asinine residents. It is a real shame, because these images are being beamed across the world and Vancouver's image is forever sullied.

It really is amazing that 63 nights of playoff bliss immediately transforms into the most primal nonsense imaginable, erasing everything prior. What a shameful mess.

Out of that hell comes a kind of cleansing. The same area of riots is now one of healing messages on boarded windows and young volunteers picking up garbage and cleaning graffiti from fixed surfaces. Where there was a kind of forlorn despair this morning, there is now a renewed sense of pride and determination to continue on. Too bad you won't hear much of these wonderful people in the news. You rarely do.

It is difficult, as a Vancouverite, to see and read about all of this.
This is not reflective of Vancouver, the city nor the support we show for our teams. It is wonderful, and was throughout the Canucks playoff run, how people could gather and celebrate. This started in the Olympics and it was cool to watch that we could do this for our team.
This would have happened whether the Canucks won, or lost....this was premeditated, planned.
I should note that most Vancouverites would vote for ANY Canadian team who made the run. We voted for Calgary, Edmonton in years gone by...I was voting for Montreal as well...would have been great to see two Canadian teams in the finals.
Disappointing to read the multitude of disparaging remarks about the Canucks...how people were cheering for anyone-but....a bit shallow in my view.

One thing I really don't understand is why police were forced to leave an re-constitute because they lacked numbers. I would have thought preparation for the worst case, that was surprising and unfortunate.

this is the most shameful event I ever lived through here. No the police was not prepared and didn't even try.
it was a mass hysteria in the media leading up to the games and I really think the media incited some of the flames.. when you see on tv small children are screaming into the microphone that was a sign of sickening feeding... Idiots should be punished really hard.. And the only winner the owner of the team should pay most of the damages..
well hockey is a very violent sick game itself and the funs are damged goods.

Canadians won the game
but hockey hype ignores all this
i was in Van,for a Degrowth conference a couple of Saturdays ago
all day I heard honks for groups of young people roaming about downtown in their Canuck shirts
As I walked to the Canada line at Waterfront, people were still roving about and traffic was bumper to bumper
the game was on but many weren't watching
all the outdoor patios were full with TVs every 5 ft and tables loaded with beer and drinks
already litter was everywhere
these games are generally a manifestation of mindlessness
we have become a destructive mindless society in too many ways
i blame the automobile
as for crowd control, they should have anticipated a loss, provided entertainment and lots of reggae to dance to

The Chief Constable blamed anarchists not sports fans.
Liberalism must make a stand and defend the dignity of philosophical anarchism against newspeakease of blaming the violence not on sports fans but the work of true anarchists. This is the crux for the liberal party, the Harpercon regime and their allies cannot be allowed to demonize the word anarchy: liberalism must defend the philosophical higher ground in honour of Ignatieff and the Academy. The continuity of education as the alternative to war and prisons and the rich getting richer,
The NDP will be blind-sided by history as they prove more ineffectual in parliament, stymied by Harpercon denial, which is where liberalism's opportunity exists: the chance to differentiate anarchism from libertarian corporatism.
That is the crux of liberalism's claim to the radical centre. The NDP dare not go there. The Greens have inherited the conscience of the nation in default of the NDP's grab for power, which leaves liberalism defending philosophical thought itself: beginning with anarchism, and why it should not be turned into an Orwellian term of badness: take the highroad" embrace intelligent and do it on the street: define a Canada that possesses non-corporatist, free enterprise independent communitarian liberty, in which Anarchism is not defamed.