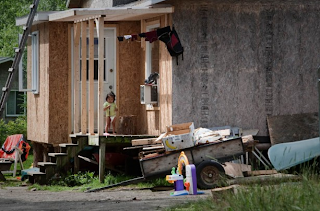 I'm not sure why we never really seem to have a national conversation about First Nations, whether it's because of collective shame, indifference or elements of racism, but the relative silence equates to passive acceptance. Last week Sheila Fraser again raised the issue of appalling conditions on reserves, which was followed by the usual shaking of collective heads, which invariably will lead to nothing of consequence.

Whatever your measure, rather than things improving on reserves, things are getting worse. The education gap is widening, living conditions deteriorating, essentials of life that other Canadians take for granted simply non-existent, it all congeals into a profoundly intolerable situation, and yet no sense that things will change in the future. Fraser's conclusion, not a new one, the present way of doing things simply doesn't work, it's time for a drastic rethink. However, it is depressing obvious that the political will doesn't exist, within that WE the populous are ultimately guilty for not demanding or caring, at least in any sustained way.

When Ignatieff first took the helm for the Liberals, I suggested he travel to one of Canada's most impoverished reserves and highlight the issues. Not a one day stunt, but part of a dedicated effort to draw attention, focus, a CORE issue that would define the "new" Liberal brand. For a party desperate to find an identity, I couldn't think of another "issue" that Liberals should wrap themselves in, because at the most basic level, that's the job of a politician to draw attention to issues, slights, concerns, which can then resonate because of unilateral focus. Part of the reason nothing ever changes on the First Nations file is because no party bothers to speak on the issues ad nauseum, nobody rolls up their sleeves and walks the streets, day after day, month after month until these issues become top of mind for Canadians. Within that reality, some dark elements exist, there is much hostility towards First Nations peoples, let's not kid ourselves and let's try to understand that part of the equation when translating to lack of action.

What we require moving forward is people who will pound the table relentlessly about the inanity of Third World conditions existing in one of the most prosperous nations on earth. We also need a complete evolution of thought, rather than dictation, mutual advancement, which means challenging both sides instead than appeasements. We need controversial solutions that attack the status quo all around. It's hard to think of a more pervasive, systemic issue that haunts the Canadian experience, that desperately needs addressing. The Liberals have failed in the past, these Conservatives convey underlying disinterest, I look to see something within my party rise and champion perhaps our greatest challenge. I also believe this type of moral imperative, if genuine in nature, would be rewarded. Politicans can make news, rather than simply react to it, let's plant a firm flag and force the conversation.

What can be done about the First Nations anyway? They get millions from the federal government, and they reject any effort to help manage that money to benefit their communities. They would rather elect band leaders that soak up all the cash and leave the rest with nothing.

Short of stripping away their rights to choose their own leaders, this situation won't change. The money is there, but the knowledge and wisdom to use the money wisely is not.

The problem is that all the money in the world can't fix what's wrong with reserves.

Doyen's comment is reflective of a lot of the sentiment in Canada.

I think that there are a lot of FN Quislings on reserves, who used federal funds to reward their associates and to keep the rest of their people in abject squalor.

I think the policies of the feds (Lib or Con) has been to starve people off the reserves. To try to force them to renounce their identity and join us as ordinary Canadians (who will still be discriminated against).

Paul Martin had the Kelowna Accord signed and the funds ready to deliver to specific area, with the First Nations consent and Harper canceled it.

Don't speak of them getting millions as the ROC also receives millions in education, health care, infrastructure while some reserves don't even have a school or the one they do have is rotten with mold.

What First Nations receive is used for daily living and yes a few live very well while others don't.

That dies not excuse the deplorable housing, lack of clean water, moldy schools and lack of health care.

Your exactly right Steve, the Liberals need to champion themselves around a just and honourable causes, and the plight of our first nations and the alarming living conditions in which they endure is an important objective indeed. However, I strongly feel that the Liberals NEED to have a complete arsenal of just and honourable causes including major issues such as; healthcare, environment, education, equality, poverty, human rights, foreign policies, global diplomacy, democratic transparency, accountability. I’m sure I’ve missed a few important issues as well but to reiterate my point the Liberals should be working as a team to champion these issues and work towards taking steps needed to correct or improve on these plights. I believe the Liberals are on the right track with this approach but more needs to be done, for example; Ralph Goodale and his work with agriculture and rural concerns, Bob Rae and his exemplary work on foreign policy and human rights, John McCallum financial and economic expertise, Stephen Dion and tireless work with environment issues and possible solutions (I think the Green Shift was a policy ahead of its time and many of the items in that plan should be pursued), Martha Hall Finlay and her stellar work on womens rights (I’m sure she will continue even though she is no longer a sitting member of parliament and I hope we see her run again in the next election as she has so much to offer), anyways the list goes on with a good many representatives. The Liberals should be more vocal and more proactive on these plights, it’s one thing to have these as policies but to champion these issues and gather other people towards your particular plight is essential, social media is the perfect tool for this endeavour. We should see more rallies, protest and campaigns for the many people effected by this inactive government and I would love to see more Liberal representatives in the thick of things. The Liberals should be getting behind the people and their causes and forget the fact some other Canadians might be annoyed or angered by their actions, as long as the campaigns are just and honourable there will be a good many Canadians who will applaud their actions.
As for the specifics of your post Steve, Sheila Frasers scathing report on the conditions our first nations face is definitely a perfect example of how the Liberals can wrap themselves in a just and moral cause, and yes many red neck types will definitely be annoyed by their efforts. I think I’ve heard that statement by Doyen many of times “ what can be done for the first nation anyways” or “they don’t want our help they just want our money” and yes thwap that is the sentiment of many Canadians. What many Canadians do not know is that our efforts and assistance has had numerous positive successes. I am sure there are many reserves that have a normal standard of living with only have a minimal percentage of the population living in deplorable conditions, and we have that in our own communities as well. The Osoyoos Indian band is one of the first bands to see year after year profits through their approach of treating the band as a business and constantly expanding the business. Chief Clarence Louis has been traveling the country teaching other bands to use this extremely productive approach to better their communities. I have worked with various native band offices for many years and I currently work for a company who operates on a native reserve, more than forty percent of my fellow workers are native and I have many good friends who are native. I would like to say that they are no different than you or I, period! Yes they have poverty and substance abuse issues but so does the rest of this country, have you ever seen the Vancouver east end, and those conditions exist in every major city in Canada. What is needed is simple EDUCATION and EMPOYMENT period!
Sorry for the long winded comment Steve, I guess you hit one of those hot button issues I’m so passionate about, and the Kelowna Accord was one of them.

The New Liberals should use the Kelowna Accord as a start. This was clearly the Grit's baby and a step in this direction Steve, yet scrapped by Harper's Conservatives. This is a great cause for the Liberals to fight for.

Please. In the 50 plus years I've been around, Liberal or Conservative parties, things only get worse for aboriginals. Sure, let's throw more money at the problem.

Who said let's throw more money at the problem? As well, your attitude is BRUTAL. Yes, let's just not bother anymore because of the past. Please.

5 of 7 elected aboriginal MP's are in the Conservative caucus (how ironic?). Let's see if there is any action on this file over the next 4 years.

A significant portion of the population have come to the conclusion, rightly or wrongly that the reserve situation is a lost cause. No amount of money has done much of anything in 50 years.

To try to fix the problem is to state publically that First Nations leadership is largely inept, but government can't say that around polite company without being called racist.

You're also not likely to get buy-in from the FN community if the current leadership gets the squeeze.

The reserve system is self seggregation chosen as some solution to maintaining "culture" or something.

The rest of the developed word has had an evolving culture for the last couple hundred years. It now consists of smartphones and internet blogs. For the FN community to continue to deny change is to their detriment.