Who Will Be The "Unite The Left" Candidate?

You can really sense a buzz within certain quarters as people digest the potentialities within the Liberal leadership race. Our media class seems intrigued, as evidenced again yesterday within the context of the Rae announcement. The idea of "supporters", a wider primary concept, allows for many scenarios beyond the traditional narrow partisan process. Of course, any anticipation also comes with the capacity for complete let down, should this race not catch fire, but the nuts and bolts are in place for opportunity.

Within any discussion about the leadership, a conversation of who will be the unity candidate, who will be the person to champion "co-operation", a point made again yesterday by columnist Tim Harper. One only has to look at the last NDP race, wherein Cullen came out of nowhere largely because of his controversial stand on co-operation to realize the issue sits in the wings waiting for an advocate. With a system that allows a wider input in the ultimate choice, the capacity exists for a raucous debate on this score.

A largely ignored story on the CBC The National a couple nights ago highlighted an emerging "unite the left" grassoots sentiment spontaneously manifesting itself, without the guidance of head office. 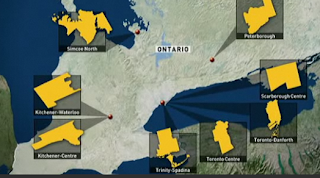 Minor in scope at this point, but also seeds that people need to pay close attention to because the concepts have resonance. This is the audience for the Liberal candidate who makes co-operation a campaign center piece. Interestingly, Trudeau has mused on this score in very clear terms, although I question whether those sentiments would manifest should he choose to run. Whatever, the larger illumination would be watching blue Liberals gush over Trudeau when policy wise he about as left as they come in the "big tent". Certain absurdities will be revealed, as they already are presently, but that is more a psychology Doctorate thesis at this point.

Again, I sense a unique interest in this Liberal race, quite out of proportion given our current lowly status. This reality provides the Liberals a terrific opportunity to re-engage with the Canadian public, present compelling policy and debates, breakout of the downward spiral.   The great debate within this race may very well turn out to be the co-operation angle.  Cullen was handicapped by a narrow audience- as well as a rally around the flag mentality from opponents- a situation the Liberal race could evolve outside of, with the right advocate.  One thing is clear, there are rumbling out there in the hinterland, an audience waiting for further articulation.

I'm sure Warren Kinsella and other right wing liberals will spend the leadership campaign bad mouthing Trudeau as he has done to the last four leaders, the Ontario party is drifting further and further to the right, alienating ever more liberal'supporters' with their hidden privatization schemes so, we'll see how much support is left for liberalism in a years' time

Liberals have gone far enough to the left as it is. We don't need to create one left-wing party to battle the right and completely polarize Canadian politics.

Actually we do have to battle the right in a co-ordinated fashion, sort of like how they did to stop us.

Jordan: all that means is that corporatism wins again, and is precisely why there are no other liberal parties left in the world,they all failed to stand up to corporations and their increasing hegemony on everything. It's democracy or corporate capitalism, an either or. Liberalism as the pursuit of greatest equal liberty has foundered in the gangster capitalism of neo-liberalism: liberals who think fiscal conservatism means prudence, rather than the merger of the state and corporations have betrayed democracy, which is the legacy of right wing Liberals like Ignatieff, Martin, Manley and all the other continental corporatists.It's now or never for liberalism: either support democracy or get out of the way because the rest of us have had enough of kinder gentler fascism and the politics of the Hanseatic league and liberal conservatism, where money governs, and democracy is a fraud.