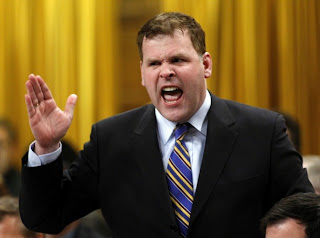 Well, it looks like John Baird is set to face some stiff competition in the next election. Baird won the riding by 9% in 2006, prior to that the Liberals had held it for the past three elections. A former Liberal cabinet minister, is rising to the challenge of turfing the blowhard:

Former Liberal defence minister David Pratt, who was a rising star in the government of Paul Martin, will likely run against Conservative Environment Minister John Baird in the next federal election, he says.

Mr. Pratt, a veteran Nepean politician, said he is "almost 100-per-cent certain" that he will go for the Liberal nomination in Ottawa West-Nepean.

"I'm very, very interested and very motivated," said Mr. Pratt. "I almost have to do it. The party has to field a strong candidate against Mr. Baird."

Mr. Pratt told the Citizen Tuesday that he has talked to both Liberal party and riding officials and become convinced that the riding can be won. He grew up in the Crystal Beach neighbourhood of the riding and notes that the riding historically has swung between the Liberals and the Conservatives.

He said he feels compelled to run to defend the role and finances of the federal government, to speak out against the "hyper-partisanship" of the Conservatives and defend the role of Ottawa as the nation's capital.

I'm glad to see the Liberals are making a push in this riding, while it will be a challenge, having a candidate of this stature presents a conceivable win. Anyone who is disgusted at the level of discourse in our Parliament should welcome any development that threatens to unseat the likes of John Baird.

I wonder if The Green Shift was the primary motivator that enticed Pratt to run ;)

Good luck with Pratt. He was one of the most rightwing Liberals of all time who was a total warmonger in defence. I'm surprised he hasn't switched parties and decided to run as a Conservative. If that guy had been defence minister in 2003 - Canada would have had troops in Iraq!

If David Pratt is an example of the kinds of people who would be put into positions of power in a Liberal gov't all i can say is CAVEAT EMPTOR!

That would be a fun riding to watch if its true. Pratt's going to need alot of help...Baird is very popular in that riding, works very hard, and, the majority of voters in that area are so close to Ottawa that they dont pay attention to the Lib/Con drive by smears in the blogosphere. The economy around the NCC is never really an issue, and, CFRA doesnt hurt the Con candidates either. Cant see it happening..its just ther area he's in right now. Cant see anyone defeating David McGuinty either. Just my 2cents.
billg

Fair points for sure.

Yes the warmonger, who after politics went to work for the Red Cross.

"Good luck with Pratt. He was one of the most rightwing Liberals of all time "

That's why the Liberals are the big tent. Even if I don't agree with some on the right hand side of the party I'm glad to be able to discuss rationally and openly the issues of the day without being called a "lefttard" or something equally juvenile.

I live in the riding and I was heavily involved in three of the four elections won by the last Member for this riding, Marlene Catterall. She won her first in 1988 and her last in 2004 before retiring in 2005.

David Pratt you should remember lost to Pierre Poilivre in Nepean-Centre in 2004 by a wide margin. So to me this development indicates that the Liberals really could not find another candidate besides a retread.

It is true however, that Mr. Pratt does have deep roots in the community and with the exception of Ms. Catterall, MPs in this riding have seem to have difficulties getting elected in contiguous elections.

So, I guess anything is possible but I would not hold my breath waiting for the Liberals to take this riding away from Mr. Baird. (Unfortunately)

I'm not holding my breath, and I'll defer to your inside assessment, but I don't see this as a bad development.

Just to add ottlib, this is the first time I've seen an anti-Liberal comment from you, is there a personal interest here, as far as candidate selection?

I'm not so sure that Baird is unbeatable. Ottawa West has tons of civil servants and in my experience if there is one segment of the population that absolutely detests the Tories, its all the federal civil servants who feel treated like shit!

If there is a God, let him make sure Baird doesn't win...no matter how the election turns out.

The federal environment minister has tapped a University of Calgary professor to head a group charged with advising the government on whether to institute a national carbon tax.

The article goes on, but I thought the Tories had a plan?

If people remember Baird's interference in Ottawa city politics ie transit it's possible this might hinder his election prospects. There's also the amount of media he attracts. It's one thing for an MP to be in the press, but Baird's in your face angry braying will probably turn off some voters. When he was in Queen's Park he didn't seem quite so 'in your face'.
My impression of this riding is that it is more conservative than say, neighbouring Ottawa South, so perhaps Pratt may be the right candidate (pun unintended).

For Pratt to win OWN he needs a Liberal Party that has momentum nationally - and that is just not happening.

As long as Dion and the Liberals sit idle, "potential" Liberal seats will stay out of reach.

I read that article on the carbon tax, which was an interesting frame, considering the government's current position on this approach.

"Just to add ottlib, this is the first time I've seen an anti-Liberal comment from you, is there a personal interest here, as far as candidate selection?"

I don't think what ottlib said was anti-Liberal, it is a pretty dispassionate assessment based on knowledge in the field. Maybe you're referring to his use of the word retread. Again, I think that is an accurate description of the use being made of Pratt. Now, if he had called him retard...

Steve, I know we all sense an election in the air, but I think it's important to stay objective.

David Pratt used to be the MP for Nepean-Carleton and as a resident i think he could beat Pierre Poilievre pretty handily. In fact, I'll bet Petey is shitting a brick that he might run down here.

Of course Baird isn't "unbeatable" no one is.

But Baird's popularity has soared in that riding. A party in complete disarray, and incredibly unpopular may be at risk of losing a prominent cabinet minister well liked in his own riding. That's not the case here.

The probability of Baird losing - to anyone at this point - is less than one in ten.

FWIW, Pratt lost to Poilievre because of the general anti-Liberal feeling following the Sponsorship Scandal.

And it wasn't a wide margin - the NDP candidate took just enough from Pratt for Pierre to come up the middle.

Given Pierre's record this last year, he is no where near as popular as he or his folks think.

"FWIW, Pratt lost to Poilievre because of the general anti-Liberal feeling following the Sponsorship Scandal.

And it wasn't a wide margin - the NDP candidate took just enough from Pratt for Pierre to come up the middle.

Given Pierre's record this last year, he is no where near as popular as he or his folks think."

What you been smoking Mike? Polievre won the riding by over 19,000 votes. Even adding the NDP vote the Cons win it by over 10,000.

"Steve, I know we all sense an election in the air, but I think it's important to stay objective."

Holy smokes, I used the word "conceivable", I wasn't planning a parade route. Please stop confusing the notion of having a strong candidate with assuming victory.

What are you smoking, he was talking about when Pierre defeated Pratt (by less than 4000 votes), not 2006. Pay attention. Do people even listen, or do they just go off on their tangents?

Just to add, at the very least this forces Baird and his team to focus on holding his own riding, rather than the luxury of a completely safe seat. That isn't irrelevant in the grand scheme, so victory aside, I don't think that point should be forgotten.

I see it as a good thing, though I'd rather see him take on Poilievre.

Both have blundered to be sure, but Pratt's experience versus Poilievre's idiocy seems a no brainer to me.

That said, it doesn't take much poking of the Baird to make him fly off the handle and say ridiculous things.

He's obviously got to be strong on his ability to sell the Shift and show the weakness of the government plan, specifically that their plan will also raise prices.

ottlib, what are the local issues in your view?

No real barn burning local issues really stand out. Which I guess is both an advantage and disadvantage for all parties.

The still simmering controversy and questions regarding the possible interference in the last city elections may be a factor.

Mr. Pratt was a cabinet minister who lost to raw political rookie in Pierre Poilivre. That fact should raise some flags amongst Liberals in this city about letting him have another go.

I cannot remember but I do believe he was Minister of Defence at the time of his defeat and had been for a couple of years so the concerns expressed by the first commentator to this post may be misplaced.

I have nothing personal against the guy. When it became apparent that he could be in trouble during the 2004 campaign I joined a bunch of other Catterall campaign workers in joining the Pratt campaign to blitz his riding on a couple of occasions.

So my concern in not personal or whether I think he would make a good Member of Parliament. My concern is electability.

I have said before that I have a real earnest desire to see John Baird turfed out of politics and forced to find a real job. I am not at all certain that David Pratt is the man to make that happen.

I guess my point to you, did you have someone else in mind for your riding? I'm sure some names have been talked about, other than Pratt.

I think a potted plant could have won against the Lib's in that election. In fact I think that actually happened.

Given Poilievre's focus on AdScam and presenting himself as a new 'young' voice in Ottawa was surely appealing to many, but given his recent antics, I'm sure people have been turned off.

Baird offer's the same fodder and with the Ethics Committee goings on in the news, he can hardly stand on that. Accountability Act? Haven't only 23 of some 60 odd provisions actually been enacted. Some coup. Environment? Hardly.

The interference thing seems difficult to prove but I suppose spoken of in unison with all the other 'ethical' issues, there is a case to made.