Three years until we vote, meaningless, yes I understand! Nanos poll out with a few noteworthy results, not the least of which the walking dead party, the Liberals, touch 30% nationally, pretty remarkable, even if it's a one off result(I bet they can't keep Peter C. Newman's book on the shelves). As well, EKOS out with their poll, which shows the Conservatives barely outside a statistical tie with the NDP, dissatisfaction with this government skyrocketing. The two polls provide contradictory results in one sense, but both show some evidence of Conservative cracks.

Nanos describes his latest as "steady" for the Conservatives, and the top line national results support that notion, no change whatsoever. However, looking at the regionals, we see that two places show measurable change, Atlantic Canada with a large Conservative uptick which offsets a 6% drop in Ontario, creating the national sawoff result. Poll junkies will note, Atlantic Canada has a very small sample size, poll to poll the results vary wildly, whereas Ontario is the more instructive MOE wise, within a singular poll. A very encouraging result for the Liberals, particularly because Nanos has found Ontario resilience for consecutive results:

The third place Liberals are in first place in Canada's most populous province again for a Nanos poll. Noteworthy as well, this occurs with Bob Rae at the helm.

Nanos also puts the NDP back up to 32.6% in Quebec. As well, the Liberals remain pretty firm at 27%, a solid second place result in the province. The Conservatives are an afterthought fourth in the province. We have a circumstance were "steady" shows the opposition leading in Canada's two most populated provinces, and poll to poll, this result represents a seat loss for the Conservatives.

Moving to the EKOS poll, if you look at his trendline since the election, Libs gently moving up, Conservatives consistently falling, NDP off their highs. The Conservatives down to 31.5% nationally represents weak minority terrority, less than a year into their mandate. What is really concerning for the Conservatives, the EKOS right direction/wrong direction shows considerable erosion: 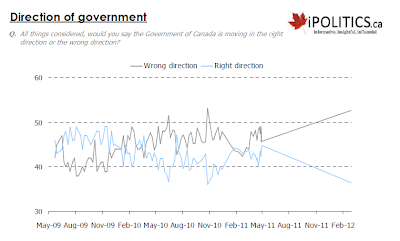 Confidence in this government is on the wane, an underlying result which has to be of some concern.

These two polls don't provide consistent narratives, one has the zombies at 30%, the other the NDP nipping at the Conservatives heels, but both show opposition to this government is manifesting itself, weakness very evident. The question now, what are we going to do about it and make that opposition optimal, in terms of effectiveness?

rowAre you sure its 3 years to the next vote? We're looking at possible by-elections in ridings that were separated by 18-26 votes, and maybe we can get a by-election in Guelph to see how big the margin would have been without all the Conservative fraud going on.
By the time this scandal works its way through, there might be more voting going on then you think.

There are only two ridings where the margin was narrow enough that there is the slightest chance of a new byelection being ordered as a result of robo-calling...any way you slice it - barring 20 Tory MPs bolting across the floor - there will be no new election until October 2015

A general election is likely within the next year now. By elections, and the Conservatives ripping apart under the strain of the scandal ought to cause some changes.

I have to admit, I see no chance of that scenario. We might get a by-election, which would be a referendum on this issue, but I don't understand how we have an election.

Hey Dan. You need to keep up. Guelph was won by a Liberal by a wide margin. We keep hearing about Guelph. Are we sure it's not about the polling station set up within the university? Elections Canada ruled it wasn't legal. However, let it stay and the votes count. This might be some of the controversy in Guelph.

I suspect that if a by-election was called in Guelph, Tory support would fall off a cliff and it would be a Liberal/NDP test battle for who is the stronger opposition party in Ontario etc...But even that is very unlikely to happen.

It would be a Lib landslide :)