That Was A Short Honeymoon

I'm not about to read too much into the first post-election poll, but it does show a striking shift: 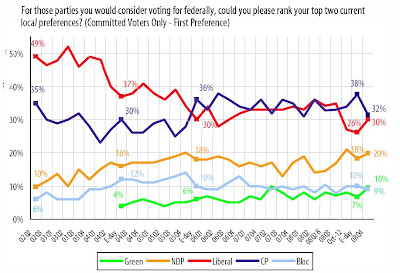 Generally, the first batch of post-election polls show a government maintaining, or just as likely, increasing their support, as the electorate resign themselves to a new mandate, they tend to rally behind the victor. The fact we see the opposite here, suggests the Harper government doesn't enjoy the confidence it claims, voters are volatile, any support tepid at best. Conservatives down in Quebec, Ontario and a seismic shift in the "west":

The above might be a reflection of a rapidly deteriorating economy, coupled with a Dion-less Liberal Party, making a voter "shift" (yes shift) easier. Whatever the reason, it is interesting that the considerable Conservative loss moves directly to the Liberals, suggesting there may be some latent hope for the party after all.

This poll means little in the grand scheme. The numbers don't really matter, because an election isn't in the cards, but it does reaffirm the view that many Conservative voters aren't fully invested, they will revert back to an alternative, if given the proper nudge. The numbers might also reflect some fallout from saying one thing during the final days of the campaign, then completely and UTTERLY contradicting one's self in mere days, once a mandate was secured.

I thought the same thing when I first saw this poll.

How does the party that just won the election 6 weeks ago lose 4 points to their chief opponent? In more than 15 years of watching polls I think this is the first time I have seen this.

One dynamic that usually takes hold immediately after elections is poll respondents "lie" to pollsters and do not admit that they supported the losers of the election. That dynamic in and of itself should have pushed the Conservatives over the 40% mark while driving the Liberals into the low 20 range.

This poll is a real head scratcher and although it should not be a cause for worry or celebration it will be interesting to see how things shake out going forward.

This just confirms for me something that I've been thinking since the morning after the election.

Canadians are dumb as dirt and the electorate of Canada has been shown to be just as gullible, just as uninformed/misinformed, just as prone to electoral blunders as our southern cousins were between the years of 2000 and roughly 2006.

Any superior finger pointing and supercilious honking should now be coming from south of the border.

Seems to me that this is probably mostly attributable to Dion. In the election the question was "Harper or Dion". Post-election the question is "Harper, or not Harper". One poll tells us little, but this could suggest that Dion actually was a drag on the party. Could it not simply be that "anonymous Liberal leader" polls better versus Stephen Harper than "Stephane Dion" does?

"One poll tells us little, but this could suggest that Dion actually was a drag on the party."

You have to entertain it, and I don't necessarily doubt it. I don't think many reasonable observers would dispute that Dion was a drag on the brand, while his numbers improved, they were still relatively dreadful and I know Lib candidates had a tough time selling Dion at the door.

"In more than 15 years of watching polls I think this is the first time I have seen this."

If memory serves, I believe the Cons opened up a double digit lead, into majority terrority, after a couple months of their first mandate.

I really hate to say this, but I do blame Dion.

Not personally, but the fact is he was dragging the party down.

The Mound of Sound said...

Steve, I think there are many Canadians just waiting, impatiently, for a Liberal leader they can rally behind. Judging by the Throne Speech, Harper seems to think the same thing.

While there are many factors that can influence these numbers, here's one.

In a leaderless situation, people are able to imagine their ideal choice as the new leader, and therefore are more likely to support the party. So you might have people that want Frank as leader, and people that want Mary. Either could win, so support levels go up. But once Mary wins, some of the Frank backers may park their support elsewhere, numbers go down.

I think any upcoming polls will not have much relevance until a leader is chosen. It also shows that Harper made a wise move calling a snap election, before the shit hit the fan.

I find the poll - out west interesting. Harper's popularity out there is plummeting.

I think people have forgotten that just before the CTV debacle, the polls were showing that Dion was headed for a minority government, Harper was on the ropes and the Libs had momentum. That's why Dion was so mad at CTV, they skewered him, the party and the country. Canadians don't trust Harper, but they panicked after Dion's threepeat of the mangled economic question.

I can only hope that when the Liberals grow a pair...of leaders, that they finally take down the Tories, and the GG selects the Liberals to form government, sans election.

Save a few hundred million for something more important than another election before we have a system of PR in place.

Jerry - I really do not think the CTV thing had much to do with anything. I think people were thinking twice about Dion because, as his popularity grew, the Green Shift took center stage again. I noticed that happened before the CTV interview.