The other day, Raphael penned a commentary in the National Post which declared "Obama honeymoon finally draws near an end". Raphael seized upon a Rasmussen poll, which seemly showed Obama's popularity seriously on the wane. I use the word SEIZED, because the partial and misleading assertion, says more about the author's BENT, than it does any meaningful analysis. First, here's the average of all polling done on Obama's approval/disapproval: 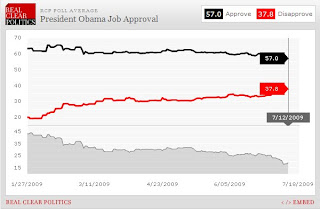 I would hardly call a large 20% spread, approval/disapproval, evidence of Obama being in trouble, if anything it's a testament to excellent approval with voters. Why Raphael uses one poll, while ignoring everything else is unfortunate, and it really speaks to his own WANT rather than an accurate presentation.

The funny thing about using Rasmussen, as your singular evidence, they've always been out of step with every other pollster. For instance, there was another poll by Gallup released the same day which gave Obama a 23% approval advantage, which came on the heels of two other polls the week prior, each showing a 24% advantage. If you look back over time, you'll find that Rasmussen is consistently an outlier on this measure. This month they gave Obama a slight 6% spread, in June a 9% spread. Interestingly, there were also three polls taken the same week of June, which showed a 20%, 22% and 34% spread respectively. Go back to May, and you see Rasmussen differs from other pollsters by an average of 17%. In other words, Rasmussen has always been on the low end of the polls, they've always unstated Obama's popularity relative to others, which means using them as your primary and SOLE measure to present any thesis is problematic at best.

I know Conservatives are desperate to see Obama fail, but when they are reduced to elevating and purposely misleading, it really does make them look foolish. Will the honeymoon end? Of course, that's a normal development over time. However, anyone with any credibility doesn't ignore 90% of the data at their disposal, so they can put forth what amounts to CRAP. Then again, looking at the publication in question, it's pretty much subpar for the course.