The above is a representative of the Conservative (Loloya Hearn NFLD MP), a species that once roamed free, in substantial numbers, throughout Atlantic Canada. However, the Conservative numbers have plummeted, mostly due to a rare virus, specific to this species, called backonyourworditis. This graph shows the devastating impact of this virus, with the population in freefall (h/t) Sir Robert Bond Papers: 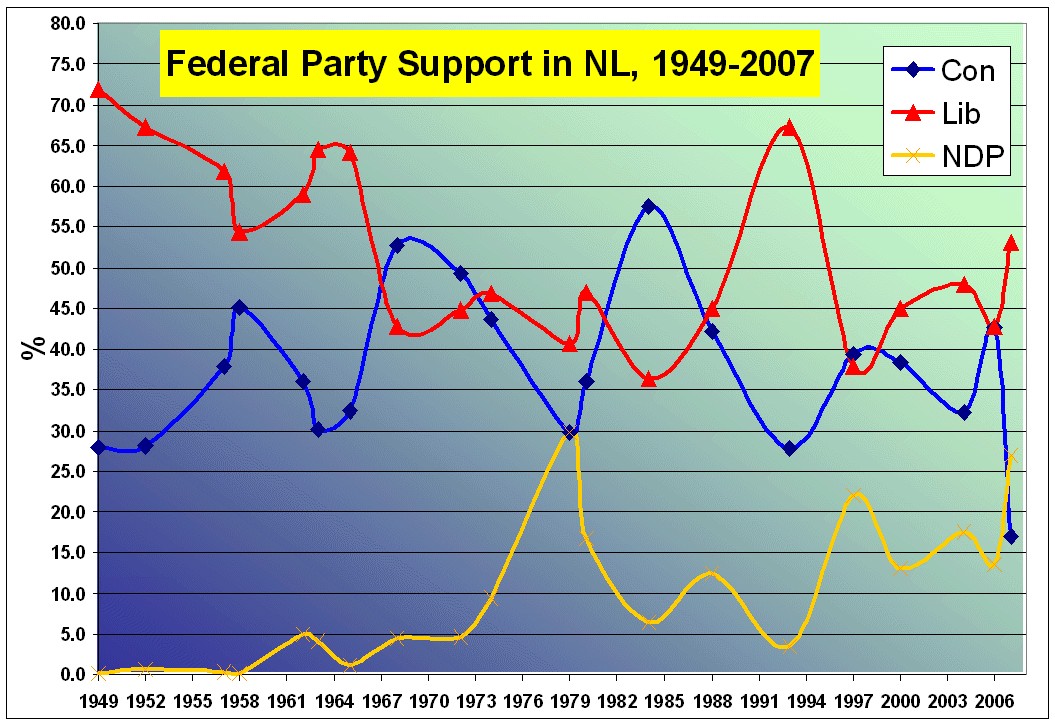 Environment Canada officials are likely to invoke the Species At Risk Act, with the following classifications. In Newfoundland, enough evidence exists to use the following designation:

ENDANGERED: a species that is facing imminent extirpation or extinction.

In Nova Scotia, the following applies, although this could change later today, depending on the discussions between provincial and federal officials:

THREATENED: a species likely to become an endangered species if nothing is done to reverse the factors leading to its extirpation or extinction.

Why should we care about the Conservative? The Conservative is a very important part of the east coast ecosystem. The Liberal, which is prolific throughout the region, has a very high rate of reproduction. The Conservative is the only natural predator for the Liberal, and has been quite successful in culling their numbers, maintaining ecological balance. Scientists fear that, in the absense of Conservatives, the Liberals population would go unchecked. This is of concern for other regions of the country, particularly Alberta, where they have been particularly successful in eradicating the Liberal, a non-native species to the region, that is known to do considerable damage.

It seems a shame, that visitors to Atlantic Canada might one day have to visit a musuem or zoo to see this species. I'm sure they will keep Peter Mackay well fed, with sizeable exhibit space and stimulation, but it's just not the same.

I'm sure they will keep Peter Mackay well fed, with sizeable exhibit space and stimulation, but it's just not the same.

The exhibit is rumoured to be situated in a potatoe patch. Visitor's are encouraged to loan MacKay their dog if they would like a photo taken.

Out of the remnants from the Progressive Conservatives in the Big Rock comes:

The Newfoundland Party. Modeled after the Scottish National Party.

I hate to be the parrot, but well done.

You may want to issue an update to your post.

I just read on the CTV website that soon after Environment Canada issued this advisory the Deputy Minister was fired and the scientist who wrote the advisory was lead away in hand-cuffs by the RCMP.

There was no comment from Stockwell Day's office when reach for comment by the media and the only comment from Mr. Baird was a dangerously red face and the expulsion of excessive amounts steam from his nose and ears.

lol, not mention that poll Dan cited in the other thread, Hearn at 11%. Ouch.