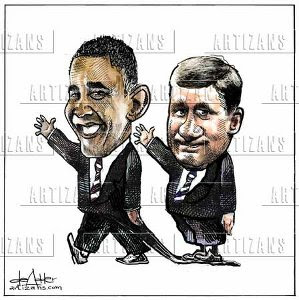 I confess, I'm to the point of NAUSEOUS, watching this government contort, reinventing themselves. Such a callous attempt to bask in Obama's popularity, so brazen it assumes none of us are capable of memory, every day a new, fresh reality. We are your canvass Stephen Harper. If Harper is able to pull this off, or more rightly. if a easily distracted media lets him get away with it, it might just be the biggest swindle in Canadian history. It's obnoxious and offensive when you think about it.

A few voices calling a spade a spade, a dose of reality in what is becoming bizarro world:

Mr. Obama will propose what he's always promised: emissions caps for greenhouse-gas emissions that cause global warming. He will create a market for permits to be purchased from the government, then traded among emitters. These permits might bring the U.S. government $300-billion in a decade or so.

Nothing like this has been proposed by the Harper government. It has preferred useless policies such as tax credits for public transit and expensive subsidies for corn-based ethanol that waste taxpayers' money. The centrepiece of the Harper approach has been that companies will have to reduce the intensity of their energy use and emissions and, if not, pay into a technology fund that might some day come up with ways of lowering emissions.

This intensity approach is quite different from Mr. Obama's hard cap. But we are now in the Orwellian world of Ottawa's climate-change policy. The Prime Minister and his spokesmen have been saying the two systems – intensity and hard caps – amount to the same thing, when, in fact, they do not. It's the same weird disconnect that had Mr. Harper blaming George Bush for the failures of Canada's own climate-change policies.

Shut up Jim Prentice, with your nonsensical references to Obama as though global warming soul mate. Put a big wool sock in it Stephen Harper, musing about lost opportunities, finally, finally a climate change partner in your midst. Give me some duct tape for every government minister and crony who can't complete a sentence without the word Obama being uttered. And, please, please PIPE UP supposed reality check, when politicians go horribly astray, because if you don't, it's actually a testament to just how USELESS a medium you swirl in.

Get over the Obama afterglow, and start speaking on the chameleons, because it's actually quite embarrassing. As for the opposition, I suggest a recent history lesson or two, because if you're not careful this fraud will have positioned himself as Obama's key ally on climate change, not to mention absolving himself on the economy and a host of other issues. There's a frame occuring, and whether it sticks is entirely a discussion on the power of propaganda. Don't let the ass ride the donkey.

Bravo.I am so sick of people saying how good he looks on Fox..he makes us proud, he is so smart.
He talks about the banks as if he is responsible for the shape they are in. He is against all regulation, the sneaky snake. knowing it was Paul Martin that regulated them. He nauseates me too

Our media are asleep at the wheel... willing to give Harper a pass...

If this is all true (which based on ALL of Harper's past statements, it cannot be), then, Yayyyyy!!! We destroyed Canada's last "conservative" party by turning Harper into a "liberal" (small l) - with lots of help from the changing situation in the US. Most likely, this is just a continuance of Harper's string of lies and "truthiness" - with the faint hope that he'll end up with a majority someday.

Clearly only Ignatieff can look up to the US administration!

The media is Harper's aider and abettor. You won't see them call him on it. And the Canadian people have demonstrated that they're more like Canadian sheeple so don't count on them for anything.

What, did I just say that out loud?

Well, it's clear the Harper strategists purposely held him low with the plan of "reintroducing" him (like a revamped laundry soap) after the past months disaster starting with the Obama visit. The trip to the US now just confirms it, with the obligatory stop at Faux News to boot.

Plus the Stepford Harper support cadre, as I like to call them, is out in force today. I've never read so many "I have never been so proud to have a great man like Stephen Harper leading our country at a time like this" crapola in weeks.

It's easy to tell when the little salvos are launched actually. You'll see two or three articles with reference to Harper. Most will be balanced, meaning a good number of posts will be pointing out the discrepancies and lies his government propogates endlessly. Then, gloriously, like a ray of sunshine has shined upon the earth, there will be one article overflowing with praises, one after another, all different yet eerily the same. Brainless, numb, all-glowing, often reiterating each other and a few even pointing out how the tied has turned, as evidenced by the comments from the article.

It is totally bizarre, and always leaves me a bit squeamish when I see it.

Stepford-world I tell ya. A little cadre of kool-aid pushers on call by the high command. That's what passes for leadership with this crowd.

I am no longer surprised by anything they do. Never. The neo-cons south of the border taught them well.

Thanks for the explanation of deAdder's cartoon. I saw it the other day and didn't quite get it.He is one of my favourite cartoonists.

Don't you find it embarrassing? Do you see Merket, Brown, Sarkozy and other world leaders going on FOX and other news to beg for attention and respect?

The BS coming out of this guy is unbelievable - perhaps some should contact our media and ask if they are going to address the BS? You know, act like real journalists?

It's just fundamental advertising, FW.
"Say what ever you want about me but mention my name everyday as often as you like."
Michael and co need to learn that lesson.
Advertising does make things happen! So Michael needs lots of money and lots of supporters. Actually, he probably needs a lot more than the other guy because the other guy has two major newspaper chains painting pure Jesus.

The crucial moment where all will be revealed is when Obama comes out with the cap and trade system - what will Harper, who has been opposed to one all along, do then, especially since Alberta and Sask are so opposed to cap and trade? When this happens, I would assume the veil will come off and Harper will be exposed for what he is.

And if it was Iggy there doing the exact same thing as PM, your narrative certainly wouldn't be the polar opposite, would it Steve?

Of course it would be. That would be the hypocritical Liberal thing to do.

You're just squealing because it isn't your boy there getting the attention while someone else is. I mean, Iggy certainly tried to grab some attention with his pathetic, desperate little Times Square stunt that he says he had no idea about. But c'mon, its not the same thing as really being noticed, is it Steve? :)

Anon - give it a rest. One article by one writer who's probably jealous does not make it true.

Opportunist - what the hell do you think Harper is?

Ego - what do you think Harper has?

Fact is all leaders have to be somewhat opportunistic and have to egos to believe they can do it. Hey, who has more ego than Layton?

Good, you're admitting Harper is a hypocrite. A positive first step...