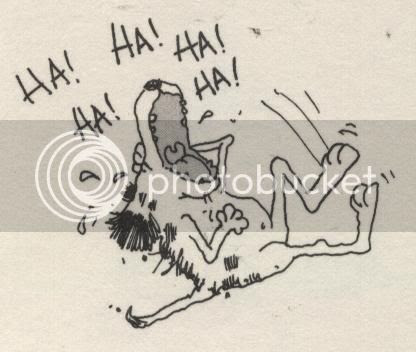 Or maybe not so much:

OTTAWA -- Stephen Harper has dropped a $3.5-million defamation suit against the Liberal party over the Cadman affair.

A terse news release says the prime minister and the Federal Liberal Agency of Canada have agreed to settle all issues related to the suit.

The action has been dismissed without costs awarded to either side and both parties have agreed not to comment further.

Harper launched the lawsuit last March after the Liberal party accused the prime minister of condoning immoral, illegal and unethical behaviour in the Cadman affair.

The Liberals charged that Harper was aware of an attempt by Conservative officials to bribe Chuck Cadman, the late independent MP, in return for his support during a crucial 2005 confidence vote.

On a Friday afternoon, no less :) Pretty much tells us who make the "mistake". Oh, tough guys...

I think we have all the facts we need.

I checked over at Blogging Tory land to learn how this is am embarrassing defeat for the LIEberals and a move of strategic chess-playing genius by Harper...nothing yet though. I'm sure they're working on it.

Oh...he knew. As sure as God made little lyin', fornicatin',Reformers, Stevie knew ALL ABOUT "it".

This is a setup of sorts. Not sure how, but Harper's got a plan.

National Post has a habit of posting their last two archived pieces to any story. Here's the two that accompanied today's announcement, which gives some indication of how the case was going:

BC'er, that will be fun to watch.

Steve, those two headlines in addition to the obvious pretty much tell the story don't they?

The good news, the networks are replaying the tape as we speak :) Nothing from the BT's yet, probably waiting for direction, usually takes 12-24 hours before someone cobbles together weak counters.

"Sources have told CTV News that Harper "was going to lose" and thus, dropped the suit."

Any chance the Liberals got some real cash out of this? It would obviously be to their advantage to have Harper lose. Seems that the fact that Harper was going to lose, that Zytaruk and the experts would testify the tape was legitimate, that he got this news released on a Friday evening and a confidentiality agreement - all of that should have cost Harper real money.

Most likely Harper ok'd a private payout to Liberal legal expenses to drop the suit. Naturally, it all included the ol' popular 'confidentiality agreement' which signals that someone is embarrassed/not pleased. Being that this has similar earmarks as that Cutler fiasco, I'm betting Harper just cut a cheque that his bosses' aren't happy with. But then again, they're so happy to be back spending imaginary Canadian money again, I don't know if they care...

Harper has still lost - because people will always doubt him, wonder and be suspicious. He has not cleared his name.