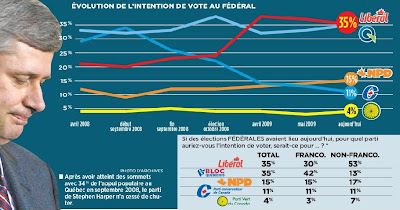 A new Leger poll that puts Conservative support "at it's lowest since 2005". An interesting result. A couple of other polls were starting to show evidence that the Cons had possibly bottomed out in Quebec, a SLIGHT recovery.

A nice result for the NDP in this poll, not much different from Leger's last result, but much higher than a couple recent offerings from EKOS and AR (supporters will note that both the Quebec pollsters give the NDP their best showing).

Nothing particularly earth shattering within the Bloc/Liberal dynamic. More evidence of a marginal Liberal pullback, a 4% lead is now a tie. This minor movement seems consistent with other findings, but the Liberals are still well placed.

Little graphical typo in that graphic, as they used the logo for the PQ instead of the Bloc in the chart.

We should have forced an election. The "nobody wants an election" talk would have faded after a day or two. The Conservatives would have been dead in the water.

We've given the Conservatives another chance. We should've taken them down when they were vulnerable.

...supporters will note that both the Quebec pollsters give the NDP their best showing...

And that the largest-N samples did, too :-)

I'm still leaning to agreeing with Cari... most gov'ts defeat themselves and despite the foul, unethical stench we smell from the CON ranks, most Canadians see them as bailing as fast as they can. Not exactly embracing them, but also not fed up either.
We've still got some work to get our house completely in order, too. Like where are some of the star candidates we typically attract?

"Like where are some of the star candidates we typically attract?"

I've been keeping an eye on the ridings. There are tons of people coming forward to run, many of them with very high profile.

To be fair, we've also seen a 8%, 7.8% and a 10% from three of the more reputable pollsters. The NDP scored 12% in the last election. In all honesty, I see no NDP breakthrough in Quebec for the next election. In fact, Mulclair will be life and death to keep his seat. Feel free to copy that comment for future reference ;)

When it comes to polls about what is going to happen in Quebec, "reputable" is a word that can be used to describe Quebec based polling companies that regularly conduct surveys of Quebecers vote intentions with sample sizes of 1,000. There is nothing particularly "reputable" about the teeny-weeny Quebec sub-sample numbers from national polling companies based in Toronto.

Its interesting that all through late 2007 and 2008 we saw the same pattern - CROP and Leger would have the NDP at anywhere from 13 to 17% while the national polls would have them at 6% or 7% in Quebec. Why that is, I cannot explain - though I THINK I saw somewhere that CROP and Leger mention the names of the party leaders when they read the choices in the "How would you vote?" question - that if that is the case, it stands to reason that when you include Jack Layton with the NDP - it drives up the support numbers since (much as it drives a lot of Liberals nuts) Layton is very popular in Quebec.

EKOS gives the NDP 9% today, with a very low margin of error 4.2. You can put their track record up against everyone, so the disparity is noteworthy.

Using the party leader would skew results, so the fact you can't seem to replicate on straight party vote polls is concerning.

Whatever, without the Liberals with Dion, the party back in the Quebec mix, the NDP won't win any more seats in Quebec. Period. In fact, I expect us to go hard after Mulclair, given his narrow victory in 2008, a strong push and it's very doable. As far as I'm concerned, and this really is more rational than non-partisan, the NDP had their shot in the last election. Conditions were optimal, that was the opportunity. Now that those dynamics have passed, I see no chance whatsoever of any breakthrough. I just don't, and the hyper partisan spin of desperate supporters isn't worth JACK.

The NDP's fortunes in Quebec depend on the rise and fall of the BQ, not so much the Liberals. If you look at the chart by Leger its clear that over the past year rising Liberal support in Quebec comes almost 100% from former Tory voters. The fact is that substituting Dion with Ignatieff has caused CPC support in Quebec to crash - but NDP support is unchanged - suggesting to me that the NDP was never getting much of the "Liberal, but hate Dion" vote in the first place. The NDP tends to capitalize more on erosion of BQ support. In fact if you look at Outremont, you will note that the Liberal vote in 2008 was about the same as it was when they won that riding in 2006 - what has changed is that almost all of the BQ vote has coalesced with the NDP vote under the Mulcair umbrella.

Oh gawd, you're acting like they're actually a player in the province. Believe what you want, I'm quite comfortable that the NDP will not have any breakthrough in the election, their best chance has passed. That's an honest assessment, as opposed to boring need to spin everything in the NDP's favor. Can't wait for the fundraising numbers to come out, should be a real gymnastic undertaking to find appropiate excuses.

DL, people like you aren't persuasive, you're predictable. I find it all very boring to be frank.

I guess it takes a Liberal spinmeister - to be condescendingly dismissive of anyone who supports any other party. The essential ingredient for the NDP to make headway in Quebec is for the BQ to do badly (of course that would be good news for the Liberals too). The last election wasn't such a "perfect storm" for the NDP in Quebec because they needed a weak showing by the BQ, but Duceppe ended up running a very strong campaign and managed to polarize people on the culture cuts etc... that is unlikely to happen again and when the BQ does badly there is clearly a segment of BQ supporters who have the NDP as their fall-back choice. I never said it WILL happen - but it could happen.

Whatever you tool, I've been critical of the Liberals many, many times. Unlike SOME people, who read like the NDP website. I'm not dismissive of everyone, just ROBOTS. Go away now, it's a waste of time.