Two new polls, that show quite similar results. The Angus Reid poll also looks at the effect of the attack ads and the leaders, but I'll do a seperate post on these, because there is a lot to pour over. Both Angus Reid and EKOS(with a huge, prolonged sample) put both parties in the same range. Angus Reid gives the Liberals a slight edge, within MOE, although it's interesting to note this is the first time I can remember this pollster giving them any lead:

The last AR poll had a dead heat, so minimal change, but not insignificant, given that everyone is looking to see if the attack ads have moved numbers. These results would tend to show no impact, although some argue that these ads are a long term venture, a position I see as wishful thinking, in the face of lack of immediate return. We shall see, but with the massive ad buy, that is bombarding Canadians at every turn, one would hope to see something tangible. The frequency of these attack ads go well beyond, to the point of exponential, anything launched at Dion.

When Ipsos showed some movement in their poll, I cautioned that nobody should immediately look to the negative ads as symptom. Just as valid to look at the Dhalla controversy, because it was enjoyed intense coverage and it countered any positive momentum the Liberals had enjoyed. Interestingly, the EKO poll, taken over three weeks, suggests that Dhalla did hurt the Liberals, far more than the attack ads. When we compare EKOS results, averaged out over these three weeks, any narrowing relative to their last poll, is largely a function of Dhalla: 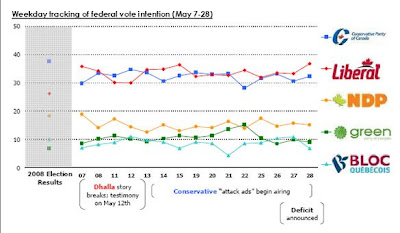 You can clearly see the Liberal numbers dive after Dhalla, and you can also see nothing of note after the attack ads aired. EKOS:

A close result, but one will note the final week, which provides the most representative numbers, shows a larger Liberal lead. The average effect of Dhalla provides much of the reasoning to explain the apparent narrowing, relative to the last EKOS poll, but after that event, we see a rebound that is relatively similar to past findings.

Both pollsters see a tight race in Quebec. EKOS merely mentions this fact, while AR shows the Bloc 36%, Libs 33%, Cons 10%- the type of numbers that have now become common. AR also gives the Liberals a 7% lead in Ontario, 43%-36%-14%. Other polls have shown the government doing better in Ontario, so this result is just further evidence of real volatility. No matter what the polls show going into an election, one thing is clear, the campaign will decide Ontario, voters haven't parked anywhere.

Graves from EKOS also said, for the first time, on some days of their polling, Ignatieff lead Harper on best PM.

One of the polls showed the CONs and Grits running neck and neck in Atlantic Canada - that's obviously an out-liar.
While its foolish to try and translate these horse numbers to any kind of breakdown, it shows that the CONs, despite their attrocious performance over the past month, is still holding its own. That is an amazing fact, I think.

I don't disagree. Realistically, you can't see the Cons going much beyond 30%, that's almost base support. In Ontario, even the polls that put the Libs ahead, do show the Cons rebounding somewhat. I honestly don't think we'll know how this shakes out until an election, both parties can see opportunity.

When EKOS publishes a poll with over 10,000 respondants, it's time to throw out everybody elses results for awhile. The EKOS poll is probably the biggest public poll ever in Canada, so i would be treating the results as gospel, and not really bother contrasting with other polls.