Quite a strange forum to criticize the Liberals desire for accountability. Stephen Harper, on the Liberals motion, that effectively identifies where infrastructure money will be spent:

He said the Liberal demands were unrealistic.

"That is not realistic. It's not going to work that way."

Harper said the Liberals need to stop throwing up "roadblocks" and let the money flow.

The kicker, Harper made the comments while announcing just the sort of specifics the Liberals want:

Prime Minister Stephen Harper announced the speeding up of another infrastructure project Friday and pushed back at Liberal accusations regarding a $3 billion stimulus fund.

Harper, speaking in Berwick, N.S., announced the federal government and the province were spending $17.5 million to widen part of Highway 101 through the Annapolis Valley.

The highway is a major east-west route and connects Halifax to Yarmouth. 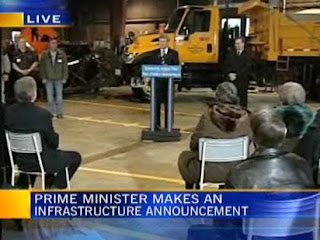 Harper is also a liar. He's a lying liar who lies.

That's a lie. The opposition has proposed nothing of the sort. All they've asked for, as you said, is to tell us within one sitting day what you're spending, where and why.

As Ed Broadbent said, they lie. They pay people to lie.

Besides, Harper shows up for "every individual project", so why all the fuss?

Harper is also a liar. He's a lying liar who lies. Not only is he a liar, he's to dense to even acknowledge when he is lying. he makes me so mad I can't wait to see the last of him. I tto watched him this morning and he digusts me. He's just like a snake a slittering reptile. And I for one despise snakes. That man has a big problem. It will come back to bite him when he least expects it.

Why didn't the press have the backbone to question him on why he didn't want to be accountable in the first place. Were theyso scared for their jobs?.Pretty soon they might not have jobs anyway so whats the big deal with them all?

Why the hell did Goodale come out and intentionally dial back on this today?

The same day Harper stands up and lies through his teeth about what is being requested is not the time to go with the "We're not really going to push this too hard for a bit" message.

It's a simple request - outline where the funds will be allocated and provide status as the projects are identified and money spent. Period. Stick to it.

The only cloudy message that could come out on this AT ALL is if the Liberals create their own drama within a drama - i.e, will they or won't they stick to their guns? Now that is a message that will fall flat and erase any credit they may get. And more mixed signals such as the one put out today will quickly lead down that path. I'm sure by the end of the weekend there will be loads of chatter about whether the Liberals are really willing to follow through.

Someone needs slapped if that becomes the story.

Just stick to your guns. It's one of the most black and white issues out there. No party should get away with saying "we need - no, we DESERVE - a huge chunk of taxpayers money but how dare anyone ask how it will be used."

It just doesn't get any simpler than that. My non-political barber even gets it, bringing it up while cutting my hair yesterday.

Marie, please don't insult snakes by refering to Harper as one of them :)

Joseph, as for Goodale cooling down the rhetoric, this may be a good thing and part of a larger strategy to ensure the Liberals look like the reasonable ones here. This way if Harper continues to push the election button the Grits can say that they’ve tried to reach out, but the Cons don’t even want to meet them half way.

Joseph, the Liberals never dialed-up the rhetoric in the first place. We were never banging the election drum. Ignatieff's presser on Tuesday delivered the same message as Goodale today: we want this money to move but there needs to be accountability, the government needs to work with us on this. The media is insisting on squeezing this into a narrative of election threat and counter-threat because it seems they've forgotten how to write anything else. But it's bullcrap.

Actually, I came to realize that after it settled a bit. I was still in the throes of realizing yet again I can no longer watch Harper speak without wanting to hurl. Love the lap-dog press in attendance. arff, arff.

Just after that I read an article about Goodale's comments.

I think you're correct, however.

The sad thing is that, despite my obvious obsession with the dirty underbelly of politics, I want government to work, no matter who forms it. And I want to see progress and sound policies for a great country that many Canadians seem to discount far too often. There is just no need for Harper to play this game. None, no matter how you cut the deck.

It is so eerily reminiscent of Bush's "my way or the highway" posturing, which worked so well until he drove completely off the cliff (name the topic, it was all in the same semi).

At the end of the day, it just reveals a very very small man, by the name of Stephen, who must have been a hellish, deceiving, and petulant child at the age of 3. Unfortunately for us now, he seems to have stopped maturing about then as well.

It's just sad that this is a political play instead of a rational exercise of parliament.

I thought the same thing initially about Goodale's comments, but then I realized you can't dial back, when you weren't clammoring in the first place.

And, just to add, I've heard all of Harper's comments now, unedited. Harper said that he would be announcing further initiatives in the coming days and weeks, that he would let Canadians know. Those comments make this false confrontation all the more confounding. It's really all about Harper trying to reassert himself. The funny thing, in every interview I've seen with his minions, the questions always point to how reasonable it is, that people want to know where the money is being spent.

Ah yes, with Harper and the "sucking and blowing" - the answer my friends is blowing in the wind.

If Harper doesn't come up with some backup docs down the road - he'll look really, really bad. The Liberals will be on record stating there should be some accountability. The NDP will attack the Liberals for voting for the stimilus package....but, perhaps the Liberals are setting a trap.