Off To The Rally 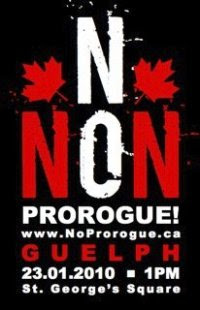 Waterloo rally was hoped to attract 300 - easily doubled that. Cars driving up & down King St constantly honking too. Oh, and crowd definitely not young, so much for the wisdom of the pundits.

Last time I was on street protests in 1956 protesting Sovjet opressionin Hungary . quite a stretch I Know ,,,
now I am off To Go to the Vancouver anti- prorogation Rally and I am 72 years old.
Enough is enough!!!!

What the hell is the matter with the NDP - apparently, professional signs and NDP orange in the Atlantic rallies.

Jack - it's supposed to be a rally for democracy, not a campaign event.

How stupid can the NDP be.

I saw the orange signs in Waterloo too - complete with a little NDP logo on the bottom. And a couple of people handing out NDP literature. Extremely low class move you dippers!

It's a shame - although we know Jack Layton has no shame, when the organizers went out of their way to make sure it wasn't partisan.

I hope the NDP antics don't ruin it - the Cons can claim it's partisan with these antics.

I suggest we all - especially Facebook folks, email the NDP expressing your disappointment and the risk they took of ruining the cause of the event.

Don't discount the possibility of CON plants trying to make it look partisan, aka their 'vote for Bob' buttons.

Con plants? Never thought of that. Then perhaps Layton should be contacted to clear that up and then (if the NDP weren't involved) Harper's bunch could be attacked for it.

The rally in Edmonton had about 200-250 people. It was cold today and snowing. The rally was great. Linda Duncan (our NDP MP) spoke, as did the liberal candidate in one of the ridings. The people around me were all about the rally and not about any one political party.

The most partisan thing that was said was when Duncan told everyone to email Harper and to copy her, and also promoted the NDP bill.

The rally concluded with the crowd spontaneously singing "O Canada."

Remember: some (indeed, many would say 'most') people BECOME partisans because they care strongly about a set of issues. So what happens when somebody sets up a non-partisan event which addresses those same issues? Are they now obliged to stay away because of the partisan taint they'd bring?

The NDP heavily politicized the Halifax rally today. One of their organizers became annoyed with me when I wouldn't take one of his signs. I told him it was important to me the day remained for the most part as non-partisan as possible. He scoffed at that saying "It only says NDP on one side. Hold up the other". Yeah, the NDP in Halifax were dicks today. No doubt. I also found out something today I'd been wondering about and that was whether Robert Thibault would be running again in West Nova. Well, according to Mike Savage, that is absolutely guaranteed. I'm not particularly happy about that, but I've softened my position on not voting for him, well because: Hey-hey, Ho-ho, Stephen Harper has got to go!!

They had speakers there from the Liberal, NDP & Green parties, plus independents, religious groups, etc, and 4 empty chairs for the CPC MPs of Waterloo county that had better things to do apparently. Of course a few people are going to be partisan (ahem, NDP!) but at least I didn't see any red (other than Maple Leafs) or big "L"s anywhere so at least one political party had some class.

But is that ChristianConservative blogger saying the K-W anti-coalition rally from last year wasn't a partisan crowd? Ya right!

Globe and Mail estimates 25,000 across the country -- great turnout everywhere, I think.