Sitting In Our Lap

Below, the party trend line since September: 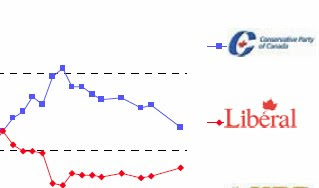 People will note that the normal ebb and flow between the two principles is stunted in this instance, the Liberals unable to fully capitalize on the Conservative downward trend. I would posit, the Conservative numbers would have fallen further, if the Liberal brand was the least bit attractive- our perceived weakness an artificial barrier.

If we're paying attention to the cementing narrative of the past week, you see a tremendous opportunity for Ignatieff to reacquire some credibility, and much more importantly, for the Liberal to stay ahead of the curve and seize the storyline. It's all about notions of democracy now, within that accountability at the most basic level. This reality that now haunts Harper, the new poster child of all that is wrong with our Parliamentary democracy means a bold Liberal Party can benefit, and in so doing reshape the brand that desperately needs a moral shot in the arm.

Ignatieff has no political baggage, in the sense that he isn't part of this historical erosion in Parliament, apparently climaxing under Harper. This affords Ignatieff the chance to champion democratic reforms in a substantive way. In fact, Ignatieff can use his time abroad to highlight his disgust at how our government operates. "I came to Ottawa, and I'm amazed at the dysfunction". We need a change, we need to "recalibrate" the way our democracy works, we need a more egalitarian expression, that isn't beholden to the whims of pseudo-kings. A tricky discussion, but one that will capture the sentiment behind prorogation.

There are a host of ways to attack the institutional problems, and position the Liberals as the anti-Harper. Whether it rises to the level of constitutional consideration or not, there are levers available to present a new vision of how democracy needs to, and can work. Saying something is wrong with the Harper approach is only part of the story, to truly distinguish you have to embrace "reform".

If Liberals really want to move the numbers, and see a return to the "mirror" effect and beyond, we have to recognize that we aren't exactly a beacon of hope on the democratic front. Harper is worse, Harper has gone further, Harper has no historical peer, all valid, but we must realize that "Liberal" is saddled with institutional malaise, nobody sees it as a force for change. Canadians dislike the current situation, that's at the heart of the perceived apathy, voter drift. We want to fully capitalize, then we take this issue head on, with a new democratic presentation that speaks with a certain authenticity.

Email ThisBlogThis!Share to TwitterShare to FacebookShare to Pinterest
Labels: Oxygen

How do you feel about the fact the LPC caucus is staying in Ottawa, while the CPC caucus is apparently going on a cross Canada tour?

I really like Jeff's suggestion that the LPC get out there and talk to people. I fear the CPC will be gaining traction if they are the only party actually doing that.

So I agree with what you are saying about how Ignatieff is in a position to push for change because he has not been part of that history with the LPC, but I still think they are missing a great opportunity to get out and connect.

Of course, I know nothing about politics, so...

I think the Lib strategy is spot on. Ignatieff will be touring. Everywhere the Cons go will highlight prorogue, not to mention they fool no one at this point. Meanwhile, we make the case in a productive way.

I think your bang on here Steve, the Liberals need to capitalize on this with concrete proposals that would give our parliament the changes needed to secure the democracy that is Canada; for example re-define the rules of prorogation and clearly differentiate between that and disillusion of parliament. Anyways I hope Mr. Ignatieff can build some momentum with his university tours and carry that momentum into a spring election. Canadians didn't want an election and he was correct to highlight that recently, however if this crisis continues then it would be in the interest of Canadians to spring an election in early spring. Again Steve, good post.

The anti prorogue facebook group will force this issue all the way, it will set the agenda. This is nothing like Obama's campaign, rather it is akin to what happened in Czechoslovakia before Havel came to power riding a wave he helped create. Harper is doomed, the group is growing every minute, and plans for taking the movement to the streets are being developed continuously, events are being planned for across the country, from January 23 through the Olympics passed March 3rd and on to the G8/20 meetings. This is a voters movement. If Iggy wants to be PM he needs to understand what is happening and to respond accordingly. The Liberal Party's natural cynicism and arrogance will get it nowhere, Iggy however, might have the intellectual chops to understand how to respond to what is a cause-based movement that has no patience for old politics.

Sorry all, but I'm not with you on this. Lots of people who dislike the prorogue just hate seeing their elected officials take a free vacation - the idealists, however, are already within our core vote (and the dippers').

I say it's the economy, stoo... We are nowhere on economic policy at our own peril. Alas, no real change in sight, as far as I'm concerned.

Unfortunately Ignatieff has shown no political astuteness, missed many many opportunities to seriously question harper tactics and to create a new narrative for the Liberals - is he lazy, does he basically agree with harper, is he afraid of elements in his caucus - who knows but if he sure hasn't stepped up to the plate yet, why do we think he will now or later. Even his comments are lame. Calling harper "crazy" - lame - he's supposed to be eloquent - how about something more articulate like Jim Travers CPAC speech a couple of weeks ago. I'm so disappointed, it's just depressing.

Susan's comment reflects how I feel. I hear astute and articulate 'academic' types give give astute and articulate commentary on the Harper government all the time. Errol Mendes quickly comes to mind. Christ, even crusty old Des Morton was hitting the nail on the head pretty effectively on The Current the other day. What is wrong with Ignatieff? I've read several of his books and the man certainly knows how to put passionate to paper. You really have to wonder if his heart is in being a politician. I mean, I'm sure he'd love to be prime minister, but I think he is having difficulty wanting to be a politician. If he is neither up to the challenge of the political role or is incapable of playing it, he should quietly step down and let someone more seasoned at the game be chosen. There is way too much at stake here for the country to be waiting for this Godot to arrive. And yes, the situation is very depressing.

I think that a bit unfair actually. If Ignatieff was using big words, people would say he doesn't relate to ordinary Canadians. The use of "crazy", I have no problem in the least.

Let's see what he says during this tour, if the "eloquence" you crave is available.