I must say, one of the highlights of the Liberal campaign to date, the smart advertising campaign. The latest English ad is a clever attack, because it isn't overtly negative, it merely offers a distinct contrast. The trouble with most attack ads, they run the risk of leaving a bad taste. The beauty of the Liberal ad, it offers as much vision as venom, which leaves the viewer a neutral presentation. By all accounts, the feedback for this ad has been very positive.

I see today that the contrast theme is more than a one off, here is the new billboard campaign for Quebec: 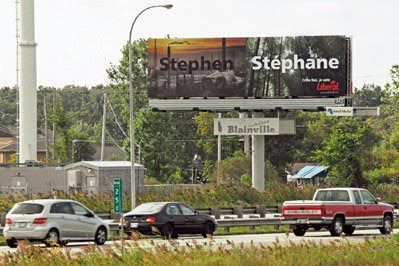 I think the above is a terrific visual, you don't need to pay much attention for the message to sink in. It's also quite shrewd to use the names of the two leaders, a subtle reminder for Quebecers.

The Liberals have clearly found the right balance, and the contrasts are presented in a high signal manner, quite different from the juvenile Conservative attacks ads. Good stuff.

Has anyone seen the Liberal commercials on TV yet?

I've seen the Green Shift one, but I've yet to see the new contrast ad, although it's apparently part of a sizable ad buy.

Those billboards are fantastic.