With massive deficits on the horizon, are we really comfortable with this hyper-partisan expenditure?: 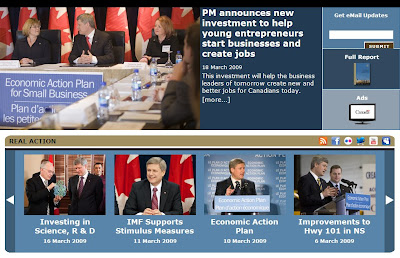 The TV ads are quite misleading, in that encourage people to visit the website, thinking they will learn more about initiatives. When you arrive, all you learn, is that Stephen Harper is an egomaniac and apparently the recession is secondary to improving electoral chances. Nobody in the media, finds this type of obscene waste of money troubling? Maybe, after the bailouts.... ;)

Can we leave out the "hyper-"? It makes your posts like, er, hyper-partisan rather than reasoned commentary. I don't think there's a reasonable level of partisanry to which government dollars should be spent above which we deem it "hyper-partisan".

I've never seen such a egomanical government website, or presentation in my life, so no "hyper-partisan" isn't overstating, in fact it's bang on. To argue otherwise, means leave on one's "reasoned" senses. I mean, come on, it's obscene.

It is obvious CTV doesn't. They are part of Canwest are they not and crying financial problems so to get bailouts, they will kiss the Harper government's a$$ to get aid even if that prostitutes them in the process. They really do not understand good business polices do they? I really hope they go bust and right away. They do not deserve anything else IMO.T hey are as much of a problem to Canadians as the great Harpoon that calls himself the Pm

. Harper doesn’t have any idea what kind of mess he’s in and spending public funds for his political survival is stealing and that’s a criminal offence and he needs to be called on it.

Where the hell has Ignatieff been these past few weeks? He should be confronting the PM on these matters right now ASAP.

Yes, this is wickedly partisan crap, but the current Liberal brain trust may be reluctant to call Harper on it as they are likely to use the same tactics if and when they form government.

Don't say I didn't warn you.

I think you can easily make the distinction between accountability and misuse of government funds for campaign style sales jobs. All you have to do is view the website, and it's easily processed. I see terrific mocking opportunities.

CTV...They are part of Canwest are they not and crying financial problems so to get bailouts

CTV is owned by BellGlobemedia, which also owns the Globe and Mail. CanWest owns the Global stations, the National Post, and a slew of other dailies.

"CTV is owned by BellGlobemedia, which also owns the Globe and Mail. CanWest owns the Global stations, the National Post, and a slew of other dailies."

Which begs the question, are taxpayers okay with bailing out the left wing media?

re taxpayers okay with bailing out the left wing media?

Only if it actually was left wing.

It is to laugh.

Egotism aside, what I find most offensive about these ads is that the timing is obviously intended to coincide with tax season, and yet most of the tax benefits those people are encourages to "reach out and take" won't actually apply until next tax season.

Thanks for the info on who owns CTV, and Mark Frances, Iggy asked for the reports on the stimulas package to be reported to them,not Ctv via tax dollars spending by the COns to campaign on TV.

The PMO should be literally ashamed of themselves and so should their entire supporters. I stand by my post and would critize the Liberals too if it were themin power and pulling this BS that the Cons are currently doing.

"The TV ads are quite misleading, in that encourage people to visit the website, thinking they will learn more about initiatives."

Hypothetical but a very probable situation.

I am an ordinary Canadian doing his taxes and I want more information on all of these new initiatives to see if I can reduce my taxes.

With that in mind I visit this website and what I see is alot of Stephen Harper with very little useful information to assist me in my desire to reduce my taxes.

I imagine I am not very impressed by this.

I recently saw an advertisement on my facebook page with Harper's face on it. Underneath it said that the government had put forward new initiatives for canadians to save on their tax dollars and to check by clicking on the add if you could save money.

It worried me that this was on facebook. that desperate?

This is part of Harper's 'recession coda' he wants us to swallow liberally. It's pure swill but after being hit over the head with some serious financial whuppass stuff, some might actually go back for seconds.
But wait! While the ads advertise a 'great program of spending initiatives', what you see is nothing, seinfeldian in its nothingness. Ahh, the cruel rub is revealed. Harper, just as his 'sudden awakening on climate change' proved to be mere political blustery, is endorsing fiscal stimulus and deficit financing with all the same intensity. He's TALKING about programs, about SPENDING but actually doing little of it, except in places where he will see benefits, oh, like targeted ridings and partisan advertisement. Oh, and bailouts of right-wing newsrags. Although he'd love to come up in a year and say, 'hey, we didn't need to spend all that money after all, we're better off than we thought!', all he cares about the impression that he's doing something, that the opposition is blocking action, that he knows a lot about economics and he's a big man. It's called creative fiction. In politics, unfortunately, it works 3 times out of 5.

Marie
you said this: I really hope they go bust and right away.

I just dont know what to say to some one who in this economy wants to see thousands of people lose thier jobs? Just because you dont like the message??