Stephen Harper, today in Quebec, telling his fellow Conservatives who his government represents. 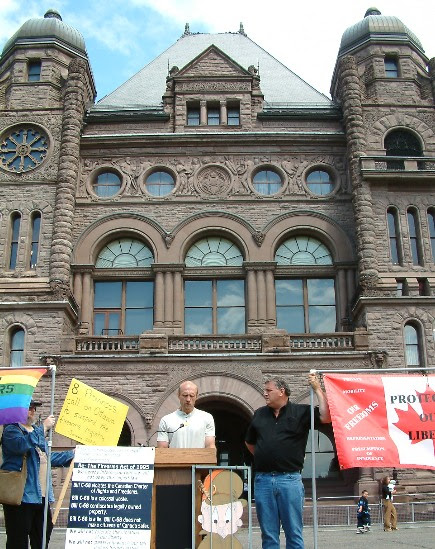 I applaud the Prime Minister for identifying all these deadbeats, that put a drain on Canada's productivity. Get to work.

Greg points out in the comments, that Harper followed the above with "or have money to hire protesters". It's almost like Harper forgets that he isn't speaking at a closed door meeting.

I can't believe even Harper would say that.

On the other hand, the participants of the secret meetings at the SPP conference n Montebello, Quebec, would love it if we'd just keep our heads to the grindstone and pay as little attention as possible.

Harper has said this line repeatedly, over the last year.

Have you got a source for this?

I listened to the speech today (CTV has it available online). Harper also made this comment March 17/07 in Toronto:

"hard-working people who didn't have the time to stage protests."

You left out the last line and it is the most incredible "or have money to hire protesters". I would suggest that our PM just charged that the labor movement paid for protesters in Quebec. The man is a pig.

Thanks, I shouldn't have omitted that. I'll add it to the post.

Not surprsied about his big mouth.

I think this was the key to The CPC winning the minority they have. The summer leading up to Joke Laytons Non-confidence vote, the CPC were doing their grassroots thing where they tell every little gathering something difference knowing the next town over wouldn't hear. Thats where they promised so-cons a repeal of SSM but then tell a more liberal area that he would never do such a thing. Its great when the news catches him lying so openly like this.

Why do you think they hate media? It catches them on their fibs. Too bad MSM doens't tell gate them like paparazzi, we might finally hear the truth from the media about what these goons say, we already know they launder money.

Ever occur to him that some protestors could be using a day of their vacation time - booked off ahead so they could attend?

Harper never worked a real job in his life until now - who's he to criticize.

This is part of silly conservative mythology that all protestors are lazy or hippies. Harper's has to keep the more radical conservatives from creating another party again somehow. This is how he's been doing it so far.

Here's a quick transcription of Harper's comments, from the CTV video of the speech, beginning at about the 7:30 mark of part 2:

"Dear friends, remember always that this is how we can measure our progress as a political movement: bring true results, work for the well-being of families and taxpayers, for truckers, the cashier, the retired person, the salesman, the farmer, the entrepreneur--for people who work hard, and who don't have the time to protest, or have the money to hire protestors."

"But who support their families--Quebeckers of the middle class, the enlarged middle class, who were largely ignored for too long, by the political class.

As others have pointed out, this is Harper's (hypocritical) attempt to present himself as one of the 'ordinary folks,' someone who's looking out for truckers and seniors and cashiers, because he's one of them.

No mention, of course, of the fact that many of these sectors of the population--and others as well--have suffered serious harm in recent years as a result of policies supported or inspired by Stephen Harper, either as PM or on the Opposition benches.

I read that last paragraph as Harper meaning that he was the "political class" whatever that means.

Certainly not truckers or cashiers.

Who hired this guy?

Actually, I think Harper is--hypocritically--trying to distinguish himself from the so-called 'political class.'

If you read William Johnson's biography of Harper, you'll get a sense of what he means by the 'political class.'

Meant to come back last night and thank you for this catch, Steve V. After I'd done enough rewinds on part 2 to get the whole passage copied, I just hadda lie down. ;-)

And thanks Stephen too for the full text.

Is he actually saying that he represents people who are essentially denied their right to protest because their lives are too hectic? Exactly how is that GOOD?