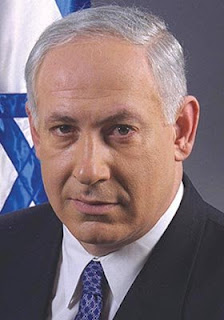 At the moment, I would argue both sides are wrong, whatever real and reasonable justifications Israel had are being lost in the severe response. Pulling away from the current state, I look to the potential horizon and see something far more dangerous. If there is one Israeli leader that strikes me as just as rigid and extreme as supposed enemies, it's Benjamin Netanyahu. The fact Netanyahu is poised to become the next Prime Minister, if the February elections play out as expected, is something that should alarm everyone, because make no mistake, if you think the situation is bad now, a Bibi reign will make it look friendly.

I almost can't believe that this far right ideologue, is on the cusp of a complete political comeback, but then again Israeli politics are so confusing and complex, anything is always possible. Whatever your view of the current crisis, everyone largely agrees that the only ultimate solution is moving forward with the peace process. With that objective reality in mind, just think of the climate, should Israel have a leader who unequivocally rejects every tenet of a possible deal. Jerusalem is off the table, Palestinian refugees are out in the cold, complete withdrawal a non-starter, rejects a Palestinian state, rejects any return of land, favors not only maintained settlements but wants to expand them, you pick the area of debate, Bibi has no appetite for any of it.

I maintain, that if this egomanical, right-wing hawk, who makes Sharon look like a hippy, takes control, the Middle East will deteriorate to a state that will make recent events look like peace in their time. Be afraid, and let's hope the convention wisdom changes, Netanyahu is denied, because this is one scary man, who would enter at the worst possible time.

How do you define "severe"? I think 300 deaths of mostly Hamas agents in 3/4 days is actually pretty restrained.

As I often ask people with that sort of opinion, what wold you do if you were running Israel and hundreds of rockets were being fired at civilians from Gaza?

I said the justification to deal with these rocket attacks was "reasonable". I will never defend Hamas, and I think innocent Israelis shouldn't have to endure indiscriminate attacks. The problem, you can't surgically dismantle Hamas in a highly populated area, you end up killing scores of civilians. You used "mostly", well how is that different from the Israelis under rocket attacks?

Sorry Jason, but the answer is biblical, what should have been done was jubilee politics, 50 years after the occupation began, land should have started returning to the original owners, sanctuaries should have been established, instead we have a people oppressed by a state and forced to turn to gangsters for help, because gangsters are willing to engage in a vendetta for every lost tooth and every lost eye. Not because they want justice, but because they want power and its percs.
You cannot build a stable nation on a lie, and the occupation is a lie, like most occupations. What is needed is spiritual leadership, not more gangster-inspired feuding.
Israel has become Goliath. Hamas and Hezbollah may be gangster-run defense leagues but the Palestinians themselves are David, and their treatment disgraces Israel and Judaism. This is about revenge cycles, and when a state is locked into a hot or cold war of oppression against a civilian population, then it is clear that the state lacks wisdom, and does not draw strength from spiritual depths. I have Jewish blood intermingled with my other genome roots, so I have sympathy for Jewish aspirations. But the prophets themselves continually railed against the hard-heartedness and stiff-necked reactionary politics of Jewish leaders, and so I say with Isaiah, let Justice flow like a river, or face judgement. What Israel needs is a new spirit, a new heart.

How do you define mostly? The latest report I heard cited 151 civilians in that number.

I've heard the word 'restrained' used over and over. Undoubtedly this will become the term 'de rigueur' in this current conflict.

Obviously no one defends Hamas' methods, specifically the rocket attacks. That said, I think to automatically defend all actions taken against them regardless of the consequences is simplistic and dangerous.

As to your point Steve, indeed having Netanyahu at the helm is a frightening proposition.

This isn't carpet bombing, with no thought of civilians, so that is how Israel can claim "restraint". However, there is no such thing as targeted attacks in one of the most heavily populated areas in the word, the idea is a logistical non-starter. You respond, you will kill kids, it happens everytime and the reaction is equally predictable.

What I'm saying, nothing is resolved, Hamas doesn't fade, until people deal with the core issues. Give the moderates something to work with, that is the best way to deal with extremism. This is why I really do fear Bibi, because then you have no chance at peace, you will undermine any remaining hope and it will get worse.

I understand it's not carpet bombing Steve, but nor am I willing to accept the facile 'restraint' meme as a foil to continue, unchallenged.

What I'm saying, nothing is resolved, Hamas doesn't fade, until people deal with the core issues.

I'm not sure the core issue can be resolved any longer. It's morphed.

That said, I agree that Netanyahu takes any hope of resolve off the table.

It's the same old, same old is it not?

It has become so commonplace that most people ignore it.

Both sides have locked themselves in a pointless struggle and neither side has the wisdom or intelligence to find a way out of it.

There is no military solution of course. The only way out of this is political but neither side has shown more than flashes of genuine desire to find an equitable political solution.

So, from my perspective I say a pox on the leaders of both sides who have failed their people for that last 6 decades and who are continuing to fail their people today.

Steve V, I read your post very carefully and I totally agree with you. Killings have never resolved any conflict. Negotiation and diplomacy is the answer. I also agree that Benjamin Netanyahu is a rightwing nut.

I may be wrong here - but doesn't international law require a warning of some sort, flyers or something? And if so, were there any warnings?

The death of one innocent child or more is severe.

I know you weren't suggesting carpet bombing, I just meant this how the word "restrained" can be used, even though it's a false terminology.

I think what needs to happen is that the US must end its unfettered support for Israel.

I've read that the US provides almost a quarter of Israel's military expenditures, for instance. I firmly believe Israel can fend for itself; it does have nukes, after all.

Maybe if Israel knew that the US didn't have its back every time it wanted to have a temper tantrum, it would be more motivated to come up with peaceful solutions.

Maybe if the Palestinian people thought they were being treated more equitably, they would be more willing to reject Hamas, reject violence, and listen to peace.

Maybe it would also be a major olive branch towards the entire Middle East.

I pray that Obama considers this course of action. This whole thing has been going on for decades and I believe that something major has to change in order for a long lasting, viable solution to appear.

Praying? Yeah, right. Rotting and fetid monotheism is one of the many reasons we have such a convoluted mess over there in the first place. I'm afraid it is long past time for mystical utterances to prove much good for anything but a good, but not so funny, laugh.

Israel has proven that one cannot use "hard power" to solve problems like terrorism. It only makes it worse by emboldening the other side. It literally becomes a futile game of whack-a-mole. For an example of this sort of failure, we can see that the war in Iraq and the greater 'war on terror" has been the best promotion for recruitment in the Jihadist movement.

since they took the land from people Israel, they should have made proper reparations from the beginning. Fair is fair. If they would have given the Palestinians their own state, and built decent infrastructure and industry, there would have been less oppression and desperation, and thus less demand for desperate behaviours, such as joining Hamas.

It would be hard to imagine the average Palestinian being in the frame of mind to encourage rocket attacks and suicide bombings, if they had new schools, hospitals, jobs, decent housing with modern plumbing, and some bling-bling, like big screen tvs, notebooks etc. If they had real, meaningful hope, growth and opportunity, none of the rocket attacks would be happening.

Example: 19 years ago, we saw an angry Chinese populace rise up against their government in Tiananmen Square. Last summer, as we watched the Olympics, a new Zeitgeist was revealed - the Chinese people are now for the most part, content with their government, the same communist, authoritarian government that they opposed 19 yrs ago. What changed since then? More people have good housing, some with flush toilets/plumbing and modern appliances for the first time. They have jobs, etc, in short, more material wealth, and are contented as a result.

Not that material wealth is the panacea for inner-peace, or world peace, for that matter, but it is hard to be malcontent, vengeful and resentful when you have lots of bright, shiny things. If anything, had Israel tried, in earnest, to improve the lives of the Palestinian people whose land they are clearly occupying, it would have come for a fraction of the cost, both in lives and money. This is an issue of making reparations to aboriginal people as well as a land claim issue. (it would be interesting to see why those who support Israel's existence because of biblical land claims - essentially an argument based on aboriginalism - do not then also support giving the Americas back to the indigenous people of North America!)

On preview, what Jack said is spot-on, the US must end its uncontested support for Israel, and for once, be objective and balanced. Criticism of Israel for its actions as a nation is not (necessarily) antisemitism. In fact, those in the self-appointed Zionist lobby who try to silence debate about this issue by shouting anyone who dares criticize Israel into the darkest corner of the basements are themselves perhaps the biggest cause of antisemitism. The only cure for this is dialogue, in earnest.

"Israel has proven that one cannot use "hard power" to solve problems like terrorism. It only makes it worse by emboldening the other side."

That fact has been shown OVER and OVER, for YEARS and DECADES, and yet we see the same routine.