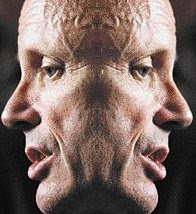 When you don't have a leg to stand on, it's probably best not to try and stand tall, as though moral superiority demands. Time didn't start on Monday, and your past is catching up to your outrage of convenience:

Bloc part of secret coalition plot in 2000 with Canadian Alliance


The separatist Bloc Québécois was part of secret plotting in 2000 to join a formal coalition with the two parties that now make up Stephen Harper's government, according to documents obtained by The Globe and Mail.

The scheme, designed to propel current Conservative minister Stockwell Day to power, undermines the Harper government's line this week that it would never sign a deal like the current one between the Liberal Party, the NDP and the Bloc...

At the time, the Alliance was ready to fly Mr. Day from his BC riding to Calgary to pick up Mr. Clark on the way to Ottawa, where the deal was to be presented to the Governor-General in the event of a minority Parliament.

Sit down, and please just shut up.

The lies and hypocrisy are being spewed at hyperspeed. The average citizen doesn't have a hope of keeping up -- just like in the election.

“It would be going against my very DNA to do a deal with separatists!”

He actually said that today in QP. These people can't lead this country.

It kind of makes you wonder when even the Conservative apologists in the MSM will finally throw their hands up in the air and say "Fuck it, you're on your own".

O/T somewhat, I noticed that Mr. Harper will be addressing the country tonight. Does anybody remember the contempt and vitriol from Mr. Harper and Conservatives when Paul Martin did exactly the same thing a few years ago?

I am always amazed how history repeats itself so much in politics. It is a clear indication that politicians do not learn from their mistakes or the mistakes of other politicians.

That pic of Stock is rather creepy. It reminds me of this
guy.

Don't you like the way I made Day's veins into a mushroom cloud ;)

I've never seen such a naked expression of duplicity, as we've seen the past few days. How anyone can defend that is beyond belief.

ottlib, that's because the huge egos they carry around - especially little Stevie - cause mini-strokes. They actually physically forget the histories they are doomed to repeat.

I'm convinced it will be proven by scientists someday. They'll call it Political Leader Syndrome, with its own Latin nomenclature as well of course. The AMA journal will have a published report that will be a 2 or 3 minute blurb on some CBC Saturday evening news hour.

It will be a boon to politicians, of course, another weapon to carry around in their bag of trips. As a matter of last resort, somewhat like Harper will appear wide-eyed.

"So sorry, PLS! I had no idea this shit had been tried before. I humbly ask for another chance. I promise I won't do whatever the hell I did if you'll give me another opportunity to be your humble servant. And now I'd like to introduce my family and tell you about my dog Checkers watching from his dog bed at home."

Of course, I meant "bag of tricks" but I sorta like the ring of "bag of trips"

Day lied about his attempt at an accord with BQ.

Harper lied about Canadian flags not being present at Coalition signing ceremony.

Harper lied about his attempt at a coalition with the BQ.

Hopefully, Clark will prove the allegations against Day.

Harpercrite is now deliberately trying to divide the country to stay in power. East vs. West, kinda like the Grey Cup;)

Does it not strengthen unity and diminish seperatism to show that Canadians can work together?

I'm just wondering if you are willing to call your own party out for their hypocrisy (denying during the election that they would entertain the idea of forming a coalition if no party won a majority) or if you are only interested in painting the Conservatives as hypocrites?

There is plenty of hypocrisy to go around, but that isn't what the issue should be about, because someone being a hypocrite never provides proof that their argument is incorrect.

Lint, what gets said during the heat of an election campaign pales substantially in comparison to what Harper pulled off today; A prime minister avoiding a vote of confidence in the House of Commons by shutting down parliament with an unprecedented early prorogation maneuver. Absolutely disgusting is what that is and is an absolute mockery of our parliamentary democracy.

I completely agree that Harper's latest move is a mistake, both politically and in terms of working to make progress on important issues. But that really has nothing to do with what my comment was referring to.

You can tell yourself whatever you like to make it feel better (for example, how you tried to justify the hypocrisy of the liberals by blaming it on the nature of campaigns rather than on their lack of a principled stand), all I am asking for is partisans not to rail against their opposition for being hypocrites when their own party has been equally hypocritical on important issues. It wasn't long ago the Liberals liked to charge that the Cons were in bed with the Bloc on various issues (which I'm sure, a few months or years down the road, they will scream again on some issue).

If you think any side of this whole debacle escapes without blame or without displaying some level of hypocrisy, I believe you are having cognitive delusions.

I have called out my party, on many, many occasions. That said, the sheer mass of hypocrisy coming from the Cons is something I've never seen in politics. It is without peer. Period.