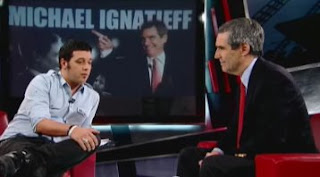 If you didn't catch Ignatieff's appear on "The Hour" last night (think you can see it on Newsworld today), I suggest a viewing, because it's impressive stuff. Anyone who has any hesitation about the "stuffy academic", unable to connect with average Canadians, should put their mind at ease. Ignatieff comes across as genuine, thoughtful and above all confident, without looking smug.

Here's one quote, which is quite revealing, when it comes to what's ahead:

"He might survive for awhile. If that budget is the kind of joke that the autumn statment was, and I mean a joke, it was a disgraceful document, we vote him down."

"If Mr. Harper manages to survive, he'll be a wounded beast. He's made terrible errors in the last eight weeks... The man can't get his story straight, this is not leadership. So, he's wounded, if he escapes this time, then I get a little time to rebuild the Liberal Party, we have some rebuilding to do, then we take him down later. Make no mistake, his days are numbered".

It was ok, his speech at his xmas party was better. He was very relaxed and confident. "Its not about me, its about us", good stuff.

Yeh, that was a great party last night. Michael has really hit his stride. His speech was inspiring, but it was also relaxed, confident, and funny. Michael Ignatieff is ready to be the Prime Minister.

The idea of suffering Strombo + Iggy made me less than enthusiastic. Although it was smart to be interviewed by Strombo as he is not known for popping the tough questions. Too bad Sarah Pailin did not have the hour.

Yes, too bad for Palin, because Couric really put her through the ringer, lol.

George isn't a tough interviewer, but he doesn't shy away from controversy.

It was a good interview and Ignatieff came off really well. While lib and Robin make me wish I'd gone to the party, I suspect we'll see some of what they saw in the New Year.

What strikes me is the contrast between Ignatieff and Harper during an interview. Even after all this time Harper is stiff and his responses sound rehearsed. They'll be interesting to watch.

The smile and laughing - Ignatieff was real - Harper's faked and it sure shows.

The right attack Iggy's eyebrows - my dad had eyebrows like that and he was a very kind, smart and fair person, but people often thought my dad was frowning or something.

I wonder how they felt about Stanfield?

"if he escapes this time, then I get a little time to rebuild the Liberal Party, we have some rebuilding to do, then we take him down later. Make no mistake, his days are numbered".

The only party that is in a position to let Harper "escape this time" will be the liberals, just like in the last parliament where they either propped up the Harper cons or didn't show up.

Strombo could have asked him, how could Harper escape since the libs are in the position to bring them down - that would have been interesting to see Iggy's "less comfortable response."

So it appears that Iggy is more interested in party rather than nation. That said, since the libs are so broke, and haven't figured out how to fundraise, I guess we all will be in for tough times in the depression of the 21st century, where money will be hard comeby, and really who will have money for frivolous things like political parties. They are not part of the food or housing line.

steve
i was at the christmas party and caught the last bit of iggy's speech...the place was packed just packed...it was awesome!!!!

"So it appears that Iggy is more interested in party rather than nation."

And Layton - what did he do again?

Oh yeah - all that hard work campaigning to take votes away from the LPC in order to ensure CPC candidates win - this all part of a plan to bring the LPC down in the hopes the NDP will be brought up.

I suppose you think he put nation before party there???

Actually Gail, Layton ran against Harper hard. Layton paid little attention to dion. Nice spin. And remember nobody owns voters, they are all free agents.
It looks like soon Iggy's going make Harper his "homeboy." LOL
I thought the liberals had maybe changed, but it's looking more of Liberal/tory same old story OR just your run of the mill - bed-hopper.

The only reason Harper will get anther chance to cause more damage, is if the Liberals support the Conservatives. Harper cares nothing for Canada, and only about power so that he can push is personal political ideology.

If Micheal shows he cares less for Canada than he does for the Liberal party, he is not a leader I can support.

No Jan, it's you who is more interested in your party than you are the nation.

Ignatieff was being pragmatic. You know, logical, considering the circumstances.

All Ignatieff has to do is give the word and the Harper neo-con nightmare can end in less than five weeks. If he doesn't get rid of Harper on Jan. 27 - then he must bear responsibility for every single solitary awful thing that Harper will do over the coming months.

Wow, the destiny of civilization in the hands of Ignatieff, who knew? I just love the melodramatic frames, all in the name of the temple of the coalition. It really boils down to a complete lack of practicality, absolutely no conception of the dynamics. Lala land.

Do the Liberals want to boot Harper out of office NOW before he does more damage or not. You seemed very gung-ho about the coalition just two weeks ago. Canada cannot endure one more day of Harper and his neo-fascist rule. If the Liberals cave in and let him continue his reign of terror any longer than necessary then they must take FULL responsibility for EVERYTHING Harper does. If the Liberal let the budget pass and let Harper stay in power - then from that day on - Canada has a de facto Harper/Ignatieff grand coalition.

If Harper adopts 2/3rds of what the coalition argued, and one could say he's almost there at this moment, then you'd have to a complete political tin ear to think you could justify another election, or force an unpopular coalition, onto people. That is the equivalent of political suicide, how someone can't detach themselves from their pet want and not see the big picture, is staggering. Seriously, just get a clue, unless of course you want a Harper majority. The coalition is only viable if Harper doesn't cave, and seeing as how he already has on a host of issues, that's an unlikely scenario. It's not selling out, or propping up, it's called using your freaking noggin.

"You seemed very gung-ho about the coalition just two weeks ago."

Ah, but here's the difference between you and I. Personally, I like the coalition, was quite happy with the parameters, thought it entirely appropriate given the circumstances. However, and here's where we part, people generally hate the concept, so much so, despite anger at Harper, he actually looks a rose compared to this foreign idea, which is far too complicated for the tertiary view to understand or want. I'm watching to see if this thing could fly, and unless Harper does a redo here, Canadians won't accept it. Say they will, argue they just need to understand, if, maybe, yadda, yadda, the simple fact- why are you guys fucking about when the economy is tanking? You'll never get past that, ESPECIALLY when Harper can argue he bailed out this, he put money into that, he lowered this, all the talking points. The Cons get moves too you know, we don't just sit there and dictate everything, what we try to do is extract as much as possible and see if it's enough to swallow hard, like an adult.

I guarantee you, short of Harper doing the poison pill routine, the coalition has no chance with the Canadian public, which is why it's remote, and everyone knows it. Be nimble, and react to changing events, this isn't two weeks ago, once parliament was prorogued it's a whole new ballgame.

And, just one more point, it's really irrelevant what a bunch of partisans think, because I am entirely confident that the overwhelming majority of Canadians will not blame the Liberal Party. If anything, those playing politics and trying to frame for advantage will be largely tuned out. I assure you, the Liberals OWN everything doesn't exist outside of the marginal.

70% of Canadians want the two parties to come up with something, but people like you just ignore what the public want, and just carry on with your little crusade. I mean, do you have any political instincts in the least, because this is such a no brainer.

If a coalition government takes power and last a full two or more years - then Canadians will learn to like it. Sometimes people don't know what's good for them and they fall for histrionic propaganda from the rightwing press.

But, my point is about reforms to EI. I think that at a MINIMUM, EI has to be improved and it has to happen NOW. HOw are all those millions of unemployed people facing starvation when their incredibly meager EI benefits run out and they get told that they have to give up every single asset they own in order to collect $500/month in welfare?

Unless all the opposition parties DEMAND action on the awful state of EI IMMEDIATELY, vast numbers of Canadians will have their lives destroyed. If Harper wants to survive - the Liberals, NDP and BQ should read him the riot act and say - improve EI NOW or you are OUT OF POWER.

If you are a Liberal and you let Harper survive another year while EI benefits continue to be as ridiculously inadequate as they are now - what will you say when you have to look an unemployed person in the eye who has all their positions lying on the street after being evicted and they are feeding their family at a food bank???

You have a choice Liberals. You can say NO to Harper.

Canadians are best tepid on the idea of a coalition. The liberals and NDP do not have the money to sell it between now and then + liberals have nothing to gain by promoting the NDP in a coalition as responsible allies when they have just chosen a right of center leader. If you are a liberal this is a no-brainer.

I find it funny, this "right of center" nonsense", when Ignatieff was known for decades as a "left wing intellectual".

BTW, just curious about the Mennonite crack the other day, very strange.